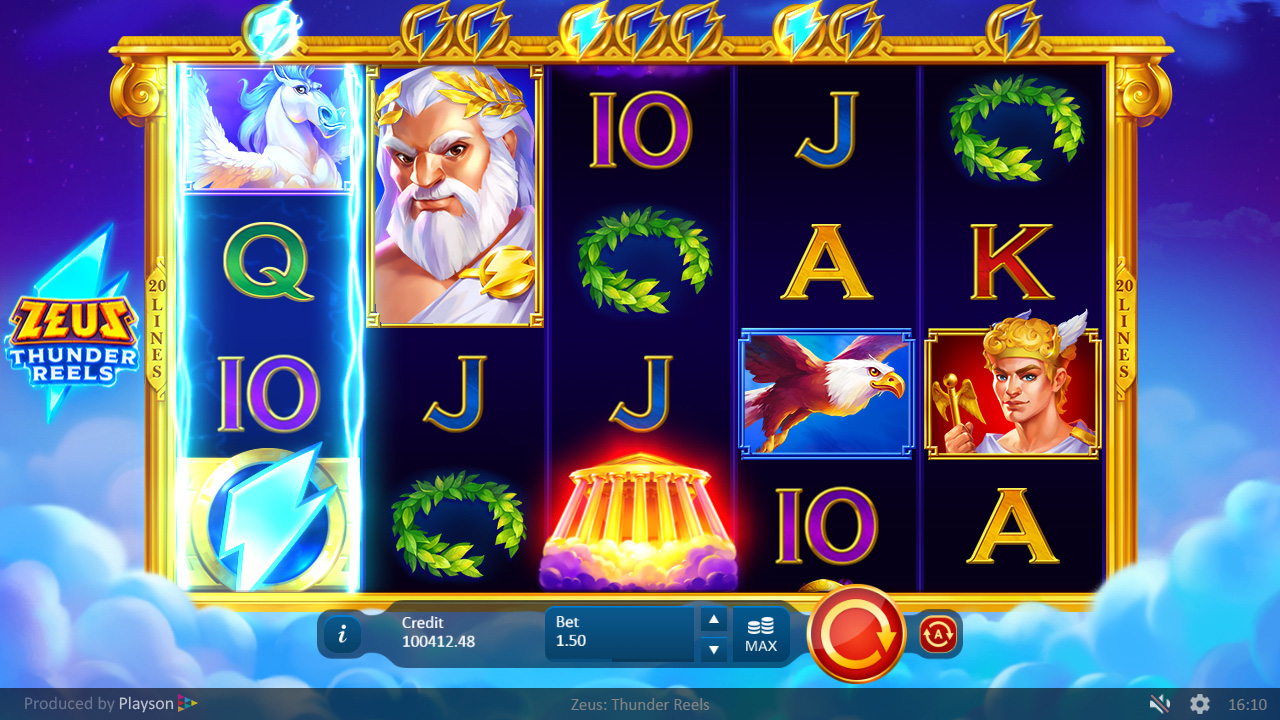 Charge your inner batteries with the new exciting slot Zeus: Thunder Reels! The gaze of ancient Greek gods is upon you as you are the chosen ones to win big.

The whole 5 reels x 4 rows game field with 20 pay lines is under high voltage generated by frequent lightning Bonus symbols. When the time comes and you are granted with enough Bonus symbol charges, the Wild Reel feature is triggered to set your heart ablaze.

To become an Olympic champion and enter the Free Spins mode you need to collect Scatter symbols. The game is full of many small events that are here to give you a full immersion and involvement in the process.

This slot is built around ancient Greek Mythology and its world-famous heroes: Zeus, Hera, and Hermes. Zeus is a high-payout symbol that is a stack of two cells. His high temper results in the appearance of multiple blue bolts of lightning as Bonus symbols across all reels. You need to get them as much as possible to charge the Wild Reel feature. As lightning is very fast, with this endeavor he receives help from Hera and Hermes. They are medium payout symbols as well as their boons: Pegasus, Eagle, and great artifacts, Talaria and Laurel wreath.

There is also a short way to get above the skies by collecting Scatter symbols in the form of an Olympic Temple.

The gameplay and animations are fast-paced and colorful. The game field is placed on the top of the clouds and all art, in general, is light and joyful. Music has a mild tempo that changes at peak moments.

3 Scatter symbols trigger 15 Free Spins. Appears during Main Game only on reels 1, 3, and 5.

Substitutes all symbols, except Scatter.

Symbols are collected to trigger the Wild Reel feature.

When a Bonus symbol lands on the reel it fills the progress of this reel.

Collecting 1 Bonus symbol above the reels 1 or 5 turns the corresponding reel into a Wild Reel for the next 1 spin.

Collecting 2 Bonus symbols above the reels 2 or 4 turns the corresponding reel into a Wild Reel for the next 2 spins.

Collecting 3 Bonus symbols above reel 3 turns the corresponding reel into a Wild Reel for the next 3 spins.

Collected Bonus symbols and Wild Reels are saved separately for each bet level. Wild Reels in the Main game do not transfer to the Free Spins.