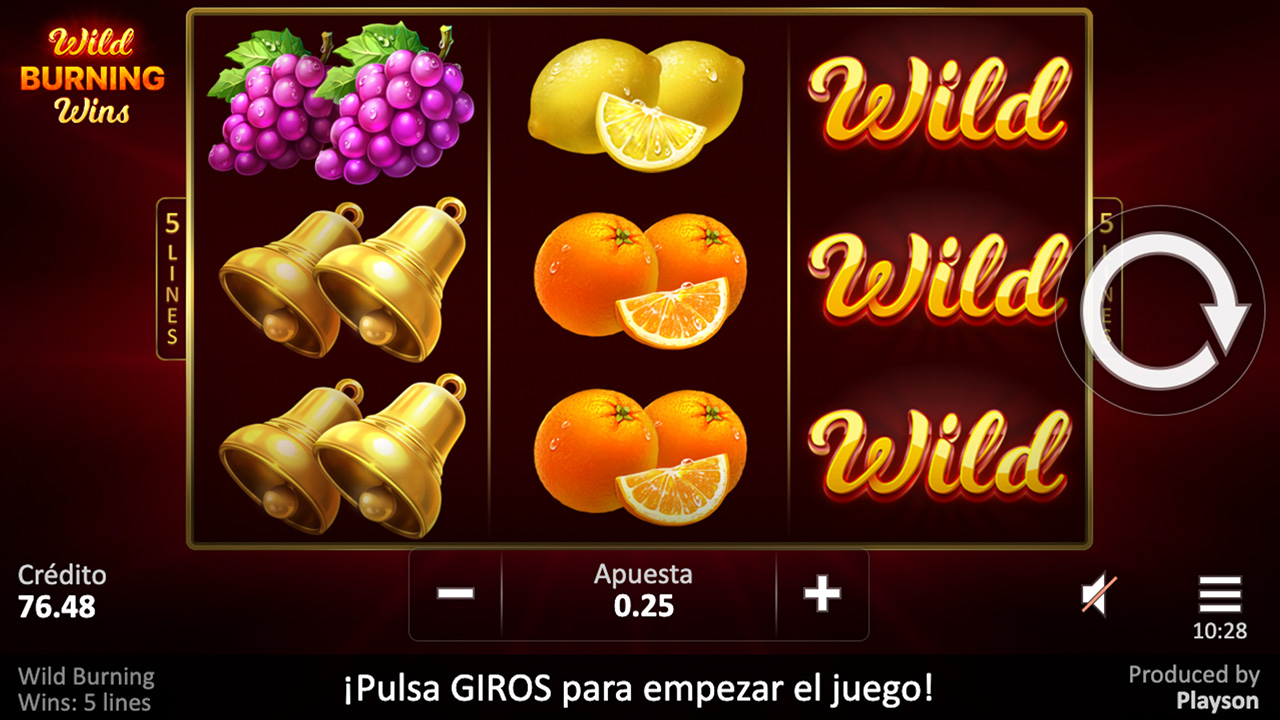 Greet wildfire video slot "Wild Burning Wins: 5 lines" with 3 reels, and 5 standard pay lines, playing from left to right. Although the slot has 3 reels, 5 winning lines and Wild symbol, it is not so simple and classic as it may seem to be at first sight. The slot has coolest features: re-spins which can fix your current combination and double chances to win; and Bonus Wheel which can bring different multipliers to the round winnings and presents Mega Win.

The respins on offer here are some of the most generous that we have seen on the market, and they can be won in one or two ways. The first way they can be earned is by filling two reels up with identical symbols or filling them all with wilds symbols. The second way is when the game also offers re-spins purely when an initial spin earns no win. When re-spins are in play, reels filled with identical symbols will become sticky, while the other reel will re-spin, giving you another opportunity to secure a win.

If you are looking for a multiplier on your wins then the Wild Burning Wins Bonus Wheel is the ideal tool to achieve this, as it offers either x10, x5, x4, x3 or x2 multipliers, depending on where it lands

Wild Burning Wins: 5 lines” is a video slot designed in the style of the Timeless Fruit Slots collection. Symbols are mellow fruits, which are drawn in natural colors, red sevens, and a red-glowed gold Wild symbol. The features of the game stand out by fiery animation during re-spin and when Bonus Wheel is active.

Wild Burning Wins will give you a taste of old school 3-reeled games that will get the juices running. The visual aspect, as well as the audio one, is clear, sharp and will show you how the real land-based fruit games sounded and looked like. Overall, it’s a great game for those who like classic slots.

The Wild symbol will substitute for all symbols and also the most valuable symbol in the game.

During Re-spin, both reels filled with identical symbols and/or Wild symbol sticks. The remaining reel will re-spin to give a second chance for winnings and or a chance to trigger the Bonus Wheel.

To trigger the Bonus Wheel, cover the whole game field with one type of symbol and/or Wild symbol. When triggering the Bonus Wheel you get 1 spin that will settle one of the multipliers to the current round winnings.