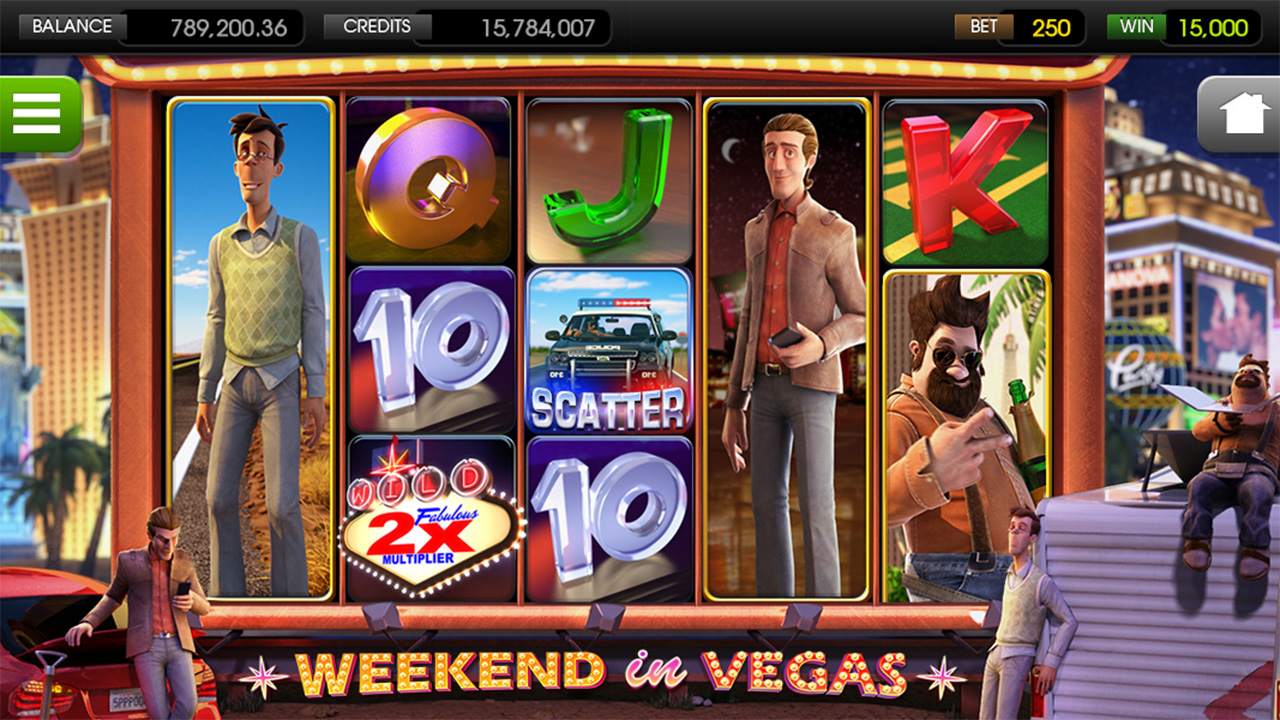 Weekend in Vegas is a 5 reel, 3 rows, a 3D cinematic video slot that brings the bright lights to the comfort of your home.

There are 243 ways to win and the game has a lot to offer.

Get into this interesting adventure on which you can win prizes and play some fantastic bonus games including Las Vegas Wilds, Police Car Scatters, the Money Wheel Bonus, the Bonus Round, and Double-Up Feature.

Any way Pays, 3 or more matching symbols on the reels from left to right will pay! The longest combination of symbols will award a payout.

Weekend in Vegas captures the essence of Las Vegas, wrapping it up with humorous characters, classic imagery and rich 3D graphics. Rich hues draw in your eyes while in the distance, the skyline of Las Vegas shows the many memorable casinos of the actual strip. On-reel characters perform funny movements as they try to find their way to the casinos the town is so well known for.

Jackpot Payout – There are not many online video slot games that have a jackpot as high as can be won via the bonus games attached to this slot game, for when playing it you could walk off with a bonus game jackpot worth a whopping 1,210,500 coins.

A classic wild symbol, represented by The Vegas sign, substitutes all other symbols in the game, except Scatter and Bonus symbols. During the main games, this symbol exists on reels II and IV. During Free games, it can occur on reels II, III, IV and V.

Obtain 3 or more Scatter Police cars anywhere on the reels to trigger the Free Spins mode. During Free spins mode, all standard and scatter payouts are doubled. Additional free spins may be awarded during the feature.

After the free spins have ended, you will earn a spin on the MONEY WHEEL, Earn a chance to win increasingly good prizes within the money wheel by landing on an arrow. Each arrow will award you a spin of the subsequent money wheel. The further into the wheel you get, the bigger your prize.

Obtaining 3 or more reels covered with the same identical character symbol will trigger the bonus round. Bonus wins are added to pay line wins. A bonus character can occur on all reels.

During the bonus round, hit the Las Vegas Strip and visit the casinos to earn huge prizes. Each character will provide a different win experience so try to earn them all.

During gameplay, if you receive 2 or more reels filled with the same identical character it will instantly trigger an additional re-spin. The feature allows you to increase your chance for the second screen bonus and/or subsequent bonus wins.

Any new wins formed on the reels will pay out after this re-spin. Everyone loves a second chance! Bonus Character symbols can occur on all reels.

When you win a standard prize you will also get the option to gamble it on the Double-Up Feature which is simply a coin toss where the choice of heads or tails is up to you.