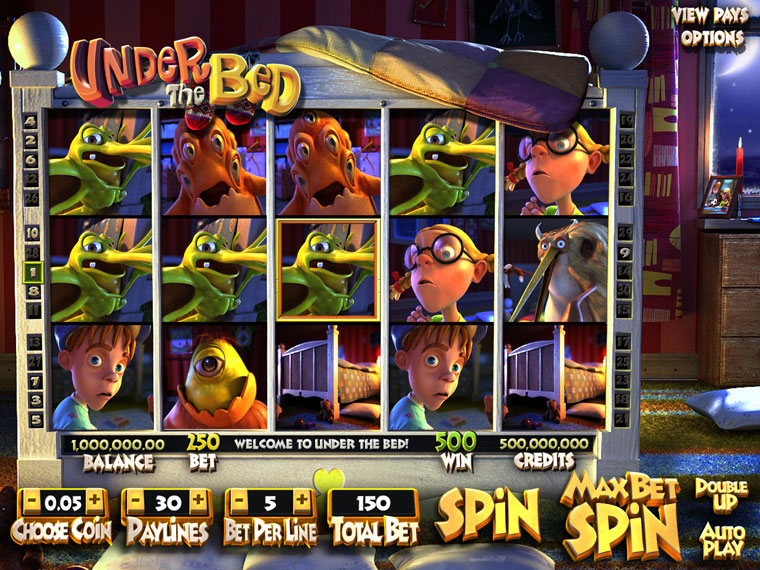 Who’s afraid of things that go bump in the night? Jesse and James certainly are!

Join these two cute kids as they huddle under the covers in Under the Bed! Four spooky monsters lurk just out of sight, but it’s not all bad, as the monsters bring with them lots of chances for big wins. You can win up to 105,000 coins on a single spin!

Under the Bed is a charming and whimsical  5-reel, 30 pay lines, 3D video slot, with two cute and weird kids as the main characters of this game and fun graphic monsters that bring this slot into something unusual. These monsters appear all over and are the center of attraction during the game, with their funny approach, sticking and climbing on the panel as throwing them over the face of the kids. Definitely worthwhile watching all their out of the blue appearances.

The symbols include a young boy, Jesse, and a girl, Jane, who are brother and sister, trying to fight the monsters under their bed. The symbols also include monsters that resemble the characters in the movie Monsters Inc. Other symbols in the game include a night lamp, the window and the area "under the bed". Bonus symbols include the bed and the door.

Get the mysterious DOOR symbol on the center position of reel 3 to unlock the 12 FREE SPINS MODE. All winnings during free spins are doubled!

Get 3 or more BED symbols anywhere on the reels to trigger the bonus round!

Join Jesse and Jane and huddle together in their dark and scary room as they fight off that not-so-imaginary monsters hiding under their beds! You’ll have a choice of five cards to pick from, each with a different monster underneath. The monsters will give you a random amount and will play a little video of that monster scaring the children. If you pick the ‘parent card’ you lose, collect.

Get a paying combination of any monster symbols with the special frames around them to trigger the Sticky Wild Feature! The Rimmed symbol will flip over to reveal a wild symbol with a random number. This position on the reels will stay wild for the number of spins indicated on the wild symbol itself!

If at any point you win during the game, you have a chance of doubling the amount through the double up feature. You simply have to bet if the roll of the dice is even or odd.