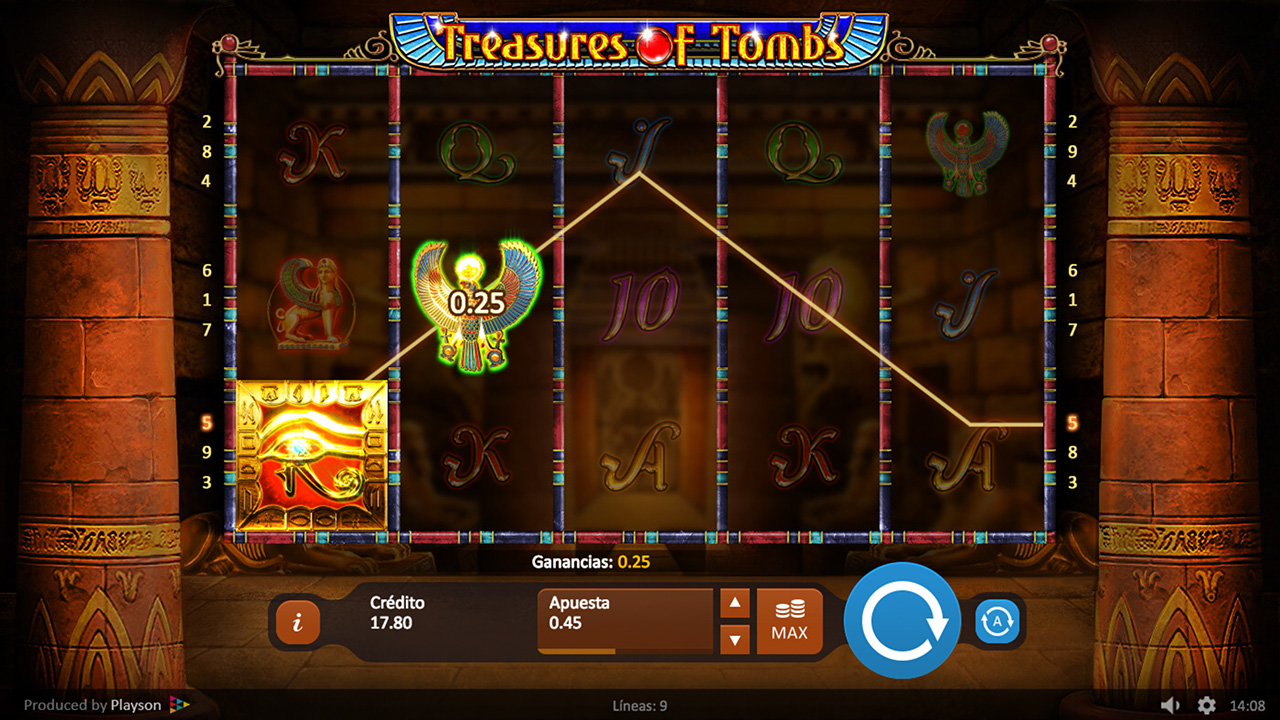 The Treasure of Tombs! Buried deep inside a cavern hundreds of years ago was gold, riches and wealth incomprehensible unless actually seen. It seems like miles and miles of treasure chests, gold bars, priceless statues are finally discovered, and now rightfully yours.

Treasures of Tombs is a 5- reel, 9 line mobile slot featuring the Eye symbol and a Bonus Game. It has a treasure and ancient theme. The lovely girl-archeologist invites you to join her in the exploration of the ancient tombs where the great treasures of the Egyptian pharaohs lie scattered right on the floor!

Symbols on the reels include scarab beetles, Horus (the falcon God), Sphinx, the Eye of Ra, the female archaeologist and the traditional playing card letters, A, K, Q, J and 10, as well.

Hit three or more identical symbols on the same active line on the adjacent reels to get paid for your winning combination. The size of paid win depends on how much is value of certain symbol. 5 of the Eye symbols will pay x200 your bet, 4 Eye symbols pays x20 your bet, 3 Eye symbols pay x2 your bet, 5 of the female archaeologist will give you a prize of 5000, 5 of the Horus (the falcon God) 2000 and 5 of the scarab and the Sphinx 750.

The beautiful girl-archeologist will tell you how to open the gates of the tomb and now you need 3 Scatters with the Eye of Horus on them to do it. Once they show up anywhere on the reels the gates of the tomb will be opened! And trigger the bonus game. The various treasures burst upon your eye. Each of them has its value. Pick them one by one to get your prize. Once you pick the one without value, the bonus game ends. But if you manage to collect all valuable objects in the tomb, you will proceed to the Super game. Here you can obtain a multiplier for your wins!

The Eye of Horus also performs the function of the Wild symbol in this slot, it can complete any winning combination using its mystic power to replace all symbols without exceptions. As a scatter Eye symbol wins are paid independently of bet lines.

The girl-archeologist found the map which leads to the forgotten tomb of the Egyptian pharaoh. She also decrypted the hieroglyphs in the ancient manuscript and knows how to open the gates of the tomb. Join her and you will find the great treasures! The symbols depict the precious things which were buried with the pharaoh. Even the common card symbols look like they are made of precious metals and gems! The nice Egyptian music playing in the background gives this slot the peculiar charm and creates the atmosphere of the adventure film.

The Eye is a Wild symbol, which substitutes for all symbols. It can appear on any reel.

Appearance of 3 or more Eye symbols in one spin awards the Bonus-game. You have to select items to get the prize. If the chosen item is empty the Bonus game is finished. If the Bonus game is played till the end then you can increase your winnings in the SUPER Bonus game.

By choosing one of the vases in the Super Bonus Game you are guaranteed to win.