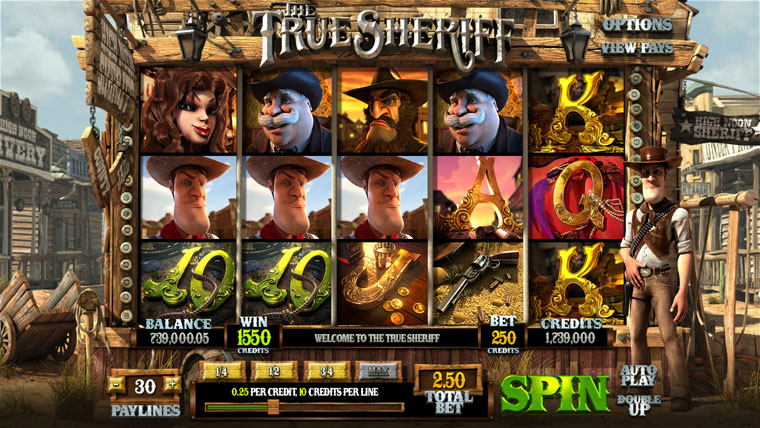 The slot is set in an authentic wild west town where a sheriff keeps the streets clean. Villainy has come to the quiet Old West town of High Noon. The people are afraid and the riches of the saloon are in the robber's sights. Only one man can stand between them. Only one man can set the wrongs to rights and bring justice to the dangerous criminal.

The True Sheriff Slot is a 30 pay line, 5-reel game that features stunning widescreen HD cinematic graphics and comes with multipliers, wild symbols, a double up, and a bonus that offers enticing chances to win big.

An energetic Western soundtrack accompanies every spin as it features soothing and nature-squee noises from birds and other wild animals, with a twang go a banjo string marking the halt of every reel spin. There is a fabulous selection of bespoke sound effects for winning spins, the free spins bonus and shoot-out feature too.

If you dare to enter the world of the Wild West this game is a must. Each and every reel icon is animated. They include the Sheriff, Bad Guy, mayor, showgirl, gun, sheriff badge, 10, J, Q, K, and A. You’ll also notice the Sheriff becomes rather animated from his position beside the reels. This becomes particularly apparent whenever a winning combination is paid (especially if it is a big win).

The sheriff springs into action with his gun when it appears anywhere on the middle reel. He’ll grab his gun and shoot icons that turn up to 5 into wilds. The reels then re-spin whilst the wilds stay in place, which means there’s a much greater chance of winning a prize.

The Showdown Bonus occurs if three gun icons appear between the Sheriff and Bad Guy on any active pay line. This will set off a series of 50/50 coin tosses, where each correct prediction will award an increasingly large selection of prizes.

10, 12 or 15 free spins will be awarded when three, four or five Sheriff Star Badge icons appear in any position. This same combination will also award 60, 300 or 3,000 coins respectively, which makes Sheriff Badge icons very powerful indeed

When the GUN symbol occurs on the center reel, the special WILD GUNS feature will occur. The Sheriff will shoot towards the reels, hitting up to FIVE unique symbols on the reels. These symbols will become WILD symbols and an instant re-spin will be awarded. Note: Wild Symbols have their own payout as well. See the paytable for details.

Get 3 or more BADGE symbols on consecutive reels from the left to trigger the FREE SPINS MODE. This will award 10, 12 or 15 free spins respectively with the benefit of additional instant prizes of 60, 300 and 3,000 coins before they begin.

During FREE SPINS MODE a special counter will be present for each reel. Each time a BADGE symbol occurs on a reel during free spins, the associated counter for that reel will increase by the count of 1. At the end of the round, counters will be compared and a special bonus payout will be awarded for these collected symbols.

THE SHODOWN Bonus Round

When the gun symbol occurs between the Bad Guy and the Sheriff on lines 1, 2 or 3, the BONUS ROUND will begin. Play a game of heads or tails to determine the winner of this cinematic showdown. Each correct guess during the heads or tails feature will take you one step closer to the top prize. Each loss will narrow your field of winnings.

After any standard payout win during the game, you may choose to double your winnings by playing the Heads or Tails coin toss game. Simply press the DOUBLE UP button when it is lit up to begin! Note: Double Up will not be available after Free Spins mode or the Showdown Bonus Round.