The Curious Machine Plus 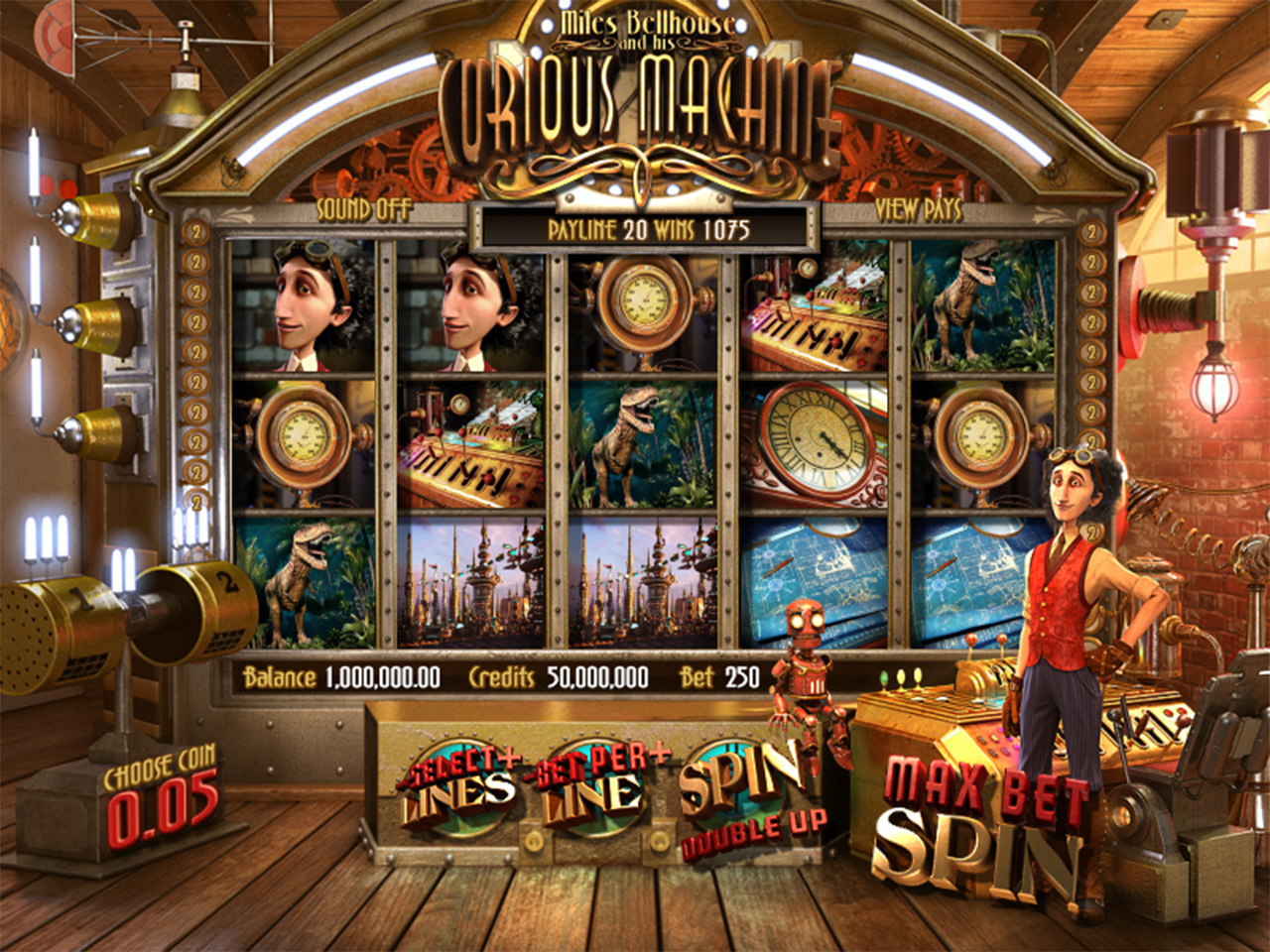 The Curious Machine slot game is known by its full name as the Miles Bellhouse and his Curious Machine. It comes with 5 reels and 30 pay lines, offering great 3D graphics, fantastic and unique bonus features and a nice jackpot of 7.500 coins.

The Curious Machine slot is based around an eccentric inventor, Miles Bellhouse, as well as his time machine that can take you back into the past. Along with Gizmo, his reliable steam-powered robot friend, they travel through time trying to evade the evil General Traitor. In the story, they need to safeguard their invention and protect it from the general, who believes the machine has great military potential.

The game has wild and scatters symbols, besides a bonus symbol. The symbols you will come across in the game include the machine, a futuristic city, the controls, a mean General Traytor, the design of the machine, a clock, an Autobot (assistant to the inventor), the Blue Prints of an invention and Miles Bellhouse himself.

The symbols will rotate a random number of times around the VORTEX, potentially resulting and allowing for a new layout of symbols and new chances for wins! VORTEX will occur before wins are calculated.

Note: If only 1 VORTEX occurs on reel 2 and 4, the VORTEX symbol may remain in its current position, or if beneficial, move to the 3rd reel. When 2 VORTEXES occur at the same time, the VORTEX on reel 4 will activate first.

Get a 5 x combo SECOND CHANCE

If no wins occur on the reels, when you are playing all 30 lines per spin, you may randomly receive a SECOND CHANCE! 1 of the 5 reels will randomly rewind, giving you a second chance at that nice win.

A second chance reel will occur where there are no winning combinations (including combinations that trigger features) and only when there is a chance to complete a 5x win of any symbol.

Note: Rewind Feature only triggers when all 30 lines are in play!

BLAST TO THE PAST in Free spins with multipliers

Get 3 or more DINOSAUR symbols on reels 1, 3, and 5 to trigger the FREE SPINS feature. Miles and Gizmo will test out their machine, and transport themselves millions of years into the past. Go back in time to the land of the lost and earn bonus credits.

Each time the reels spin, a random multiplier will be chosen, between 1x up to 5x. All wins occurring on that spin will be multiplied by that value. Wins earned from Bonus Round during free spins will not be multiplied.

Note: all features can be achieved during free spins, including additional free spins.

Get 3 or More of the TIME MACHINE symbols on reels 2, 3 and 4 to trigger the TRAVEL THROUGH TIME BONUS FEATURE. General Traytor knows nothing of the curious machine, but he has his suspicions! When he comes peeping inside, join Miles and his robotic companion, Gizmo as they flee his prying eyes in this TIME TRAVELLING second screen bonus feature!

After any standard win, you have the option of doubling your winnings. To double up, simply click the DOUBLE UP button underneath the SPIN button! You will be taken to a secondary screen where you can choose which of the robot's hands you think will contain the coin. If you guess correctly, your win is doubled! You can press collect at any time to collect your winnings.

Note: Double Up is not playable when FREE SPINS or BONUS ROUND has been triggered!