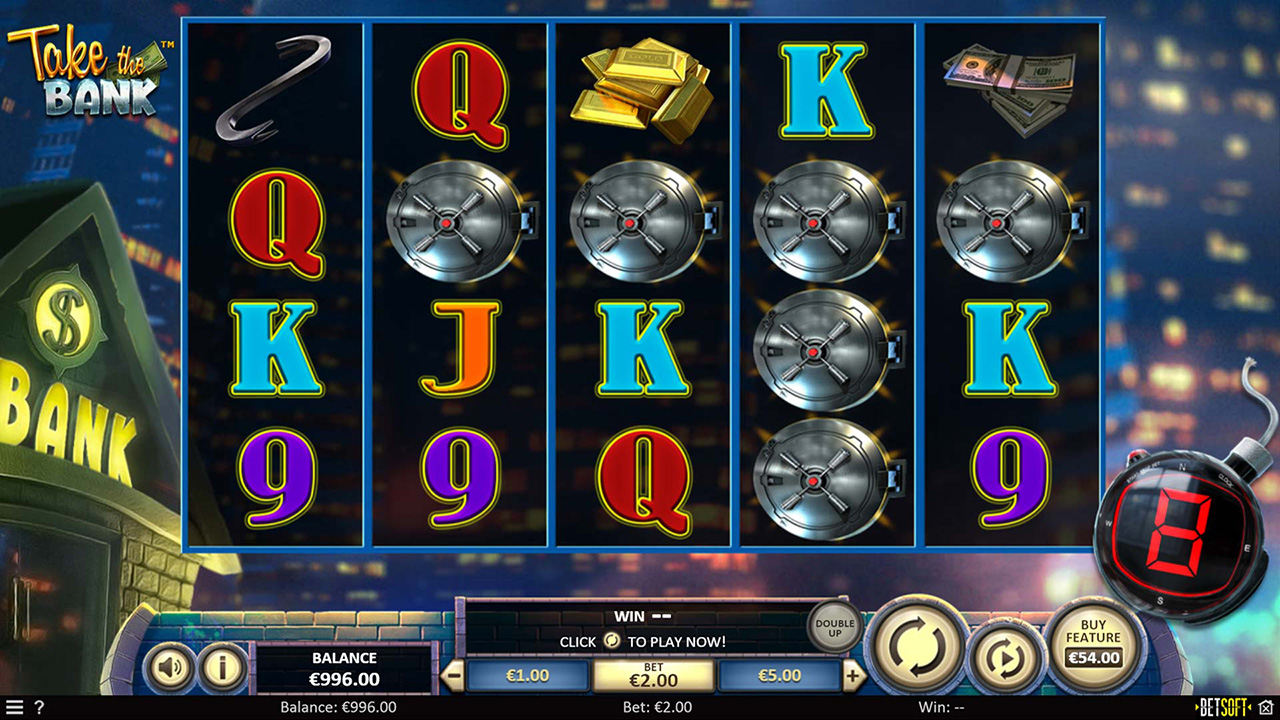 Are you ready for the heist of a lifetime? Welcome to TAKE THE BANK, a fast-paced slot with big, big payouts. Rob the bank and run away with the goods in an exciting adventure with sticky wilds bonus rounds and superb potential!

TAKE THE BAN is a 5 reels, 75 pay lines slot, with a special progression game played in rounds of 10. Each time you spin, a MASTER BOMB COUNTER, counts down from 10 to 0. Collect robbers on the reels and every 10 spins they will turn into a WILD symbol, busting the vaults wide open.

The Special Symbols are as follows:

Wild – The Wild symbol will not traditionally land on the reels, but as the result of bombs exploding on the reels. When the bombs do this, they will be replaced by Wilds which will substitute for all symbols other than Free Spins and Robbers.

Free Spins – The Free Spins symbol is the Police Car. When 3 or more of them land anywhere on the reels the Free Spins feature will be triggered. Police Car symbols only appear on reels 2, 3 or 4.

At the bottom right side of the reels is a bomb timer. When you begin playing it will be set to 10 and each time you spin the reels it will reduce by 1. Once you have reached zero, any bomb symbols left on the reels will explode and turn into Wild symbols.

If you trigger the feature you will be given 15 Free Spins. The bomb timer is disabled during the Free Spins. Instead between 5, 7 or 10 Wild symbols scattered across the reels. With each spin, they will move positions but will remain on the reels.

After any win, you can risk what you have earned by pressing the Double Up button. You bet half or all of your winnings and will win or lose based on the toss of a coin. You can attempt to double up as often as you like.

¿Tired of waiting for the Free Spins feature? The BUY FEATURE button allows you to buy into the Free Spins Feature and control how many WILDS you will see per SPIN. Buy feature awards 15 Free Spins. The cost is 21.60 for 5 wilds, 40.00 for 7 wilds, and 76.00 for 10 wilds.