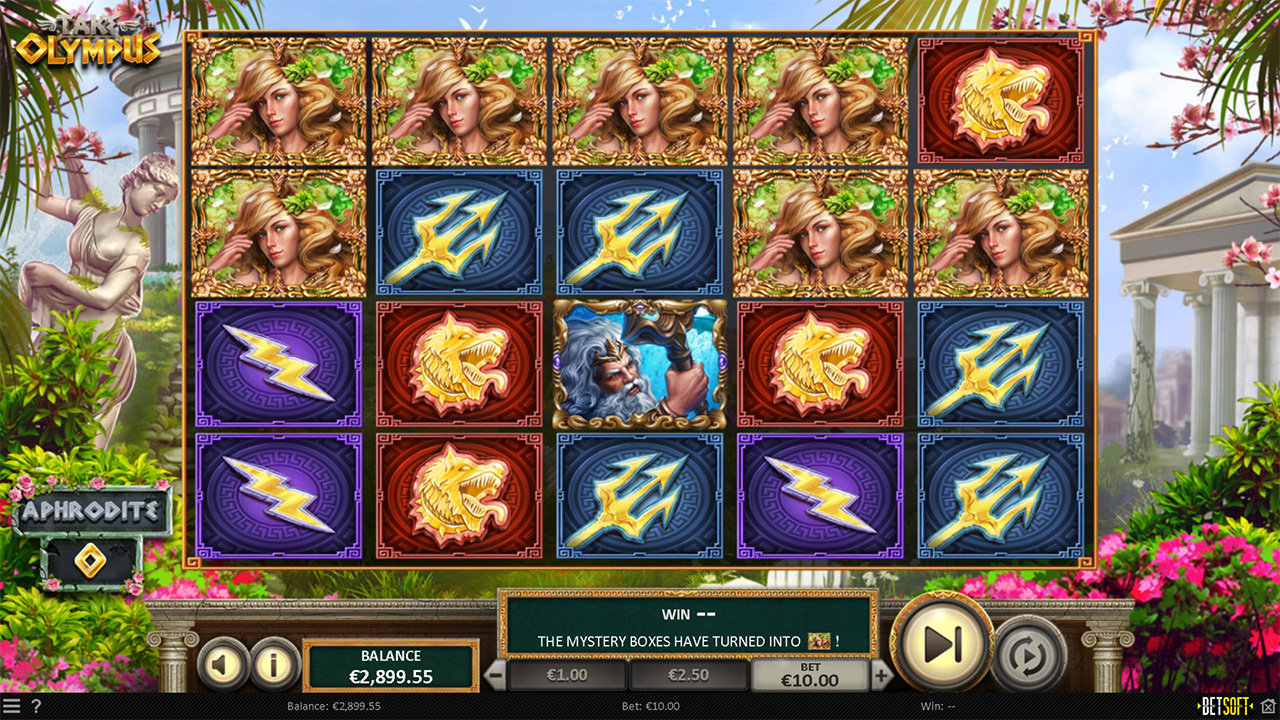 Prepare to face the ancient deities of Greece in this newest 5 reel, 50 payline video slot by Betsoft Gaming!

Prepare to face the ancient deities of Greece in TAKE OLYMPUS, the newest 5 reel, 50 payline video slot by Betsoft Gaming! This visually stunning game cycles through four Olympian Gods – Apollo, Aphrodite, Poseidon, and Hades. Each God has their own special powers, which will lead you to eternal rewards!

Take on the powers of the other Gods alongside the Mighty King of the Gods – Zeus! The ruler of Mount Olympus, Zeus, in any configuration, is WILD. When he appears in a 4-symbol tall configuration, he will award the player 10 FREE SPINS, if all 4 other Gods are also present on the reels!

Join the Master of all Tides – Poseidon, the God of Light – Apollo, Lord of the Underworld – Hades and the Goddess of Love – Aphrodite, and get a taste of the cherished immortality. Every 10 spins, the endless cycle ofthe Gods turns, bringing new powers with each new God! Multipliers, wilds, and more await you on Olympus

• THE CYCLE OF GODS – Every 10 spins, the cycle starts again, and a new God will reign over the reels. Each God builds their special power over the course of their cycle, resulting in a powerful GOD EVENT at the end ofeach cycle. Gods are chosen randomly, and no God will appear multiple times in a row.

• WRATH OF ABUNDANCE – Each God has their own special powers that affect gameplay! During each of the Gods cycle, their special symbols will be marked on the reels. These places will remain marked throughoutall 10 spins of APPOLO’S and APHRODITE’S cycles. While on POSEIDON’S cycle his special symbols willcontribute to a counter increase by 1, the special symbols on HADES’ cycle will increase the multiplier.

• ALLFATHER’S GRACE – Zeus can take on the powers of the other Gods! Wilds, Mysteries, Abundance and Chaos of Zeus offers 5+ WILDS on the reels, 5+ symbols turned into mystery symbols, large multipliers and a random number of additional FREE SPINS, depending on the ruling God!