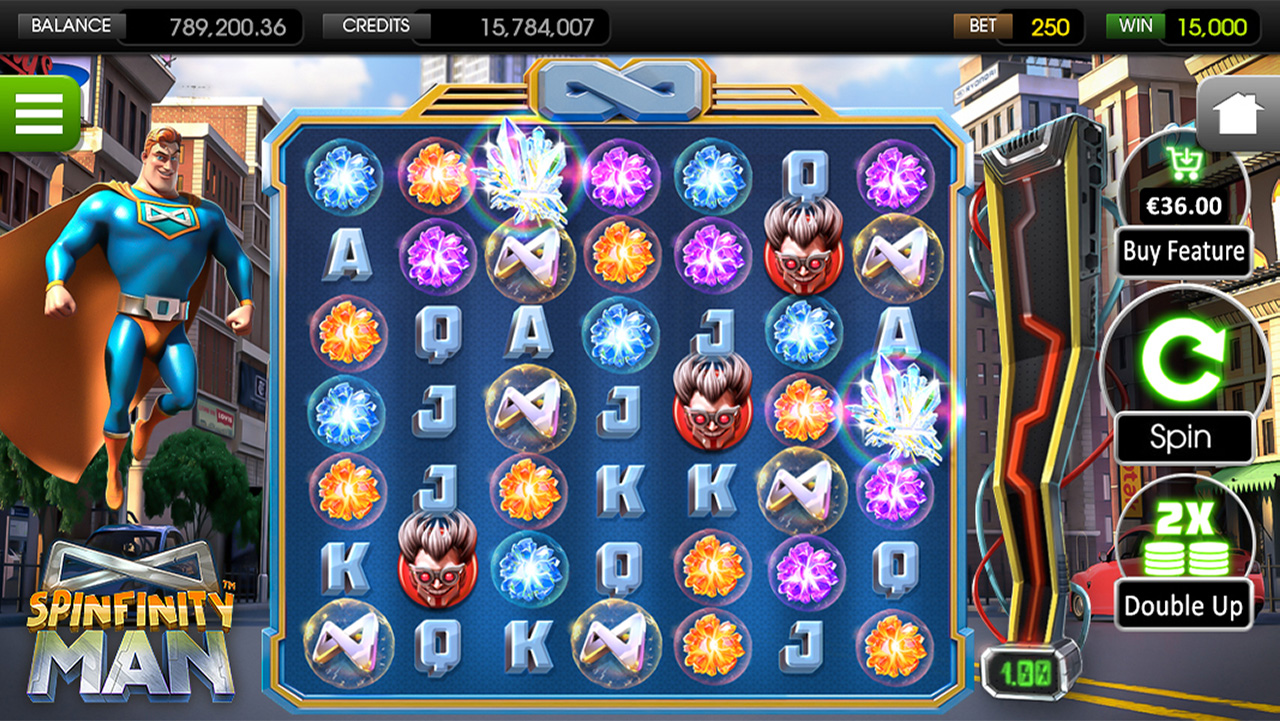 When crime plagues the streets of Metropolis, or citizens are in peril, Spinfinity Man will answer the call!

When crime plagues the streets of Metropolis, or citizens are in peril, Spinfinity Man will answer the call! With the help of special Super Wilds, a Spandex costume-full of his own superpowers, and more than a little self-importance, Spinfinity Man has become the savior of the city.

Spinfinity Man is a 7 reel, 7 rows cluster pay slot with Super Power Combos, Fan Girl rewards for exploding clusters, a Mr. X trail that leads to a Free Spins Boss Battle and a double up bonus round.

This slot is a fun and frivolous take on the golden age of superhero comics, Spinfinity Man is a cluster-based, cascading game where groups of more than 4 of the same symbol explode. Spinfinity Man’s randomly-chosen powers are drawn as animated 2×2 symbols – triggering new cascades and vanquishing groups of criminals in a single bound. Laser eye beams burn away either a full column or a full row of symbols, or both if you find a double beam. Icy breath can freeze and shatter a small or large cluster of symbols. Telepathy will remove all symbols of a single type or color.

With his face on every newspaper in town, Spinfinity Man has more than his share of admirers. Everywhere he goes – from the base game to free spins feature - his dedicated fangirl follows, hoping for a picture with her idol. When she snaps a photo, a cluster of symbols will pop and trigger an immediate cascade. The fangirl cluster count resets with every new spin – giving Spinfinity Man the chance to prove himself (and pose for more selfies) all over again.

While solving street-level crime is all in a day’s work for Spinfinity Man, a more insidious evil is encroaching on the city! Supervillain Mr. X is developing his next dastardly master plan. It’s up to our hero to follow the clues, fill a dedicated Mr. X meter, and catch him red-handed in a city-shaking bonus round!

Here the two superhumans go head-to-head, but Mr. X has an advantage: he’s replaced all Spinfinity Man’s power symbols with his own and increased the odds of them appearing.

Save the city with cluster wins

Match clusters of 4 or more symbols on the reels and watch them EXPLODE. After wins EXPLODE, NEW symbols drop into place, for the chance at more wins

When Spinfinity Man appears on the reels, one of 5 superpowers will activate for BIG WINS

Your biggest FAN is watching For each cluster explosion, she gets more excited. Explode 6 clusters or more in a single spin to activate the FAN GIRL FEATURE. A random number of symbols will EXPLODE awarding instant wins. Pose for photos with your admirer and trigger extra cascades.

When a Mr. X symbol appears on the reels, it will advance the VILLAIN TRAIL and then disappear, allowing additional symbols to drop onto the reels. Complete the “Villain Trail” to catch up to Mr. X and activate the Free Spins Bonus Round

Everything changes in the Free Spins Round as you face off against Mr. X himself. 10 free spins are awarded for filling the Villain Trail. During Free Spins, Spinfinity Man symbols become Mr. X symbols which unleash SUPER COMBOS Every Mr. X symbol collected during Free Spins awards 1 additional Free Spin.

Super Wilds create bigger clusters by substituting for any symbol other than Spinfinity Man or Mr. X. The high-value symbol is the white gem followed by the orange, violet, and blue.

Power up your play

Animated 2×2 symbols in the base game activate Spinfinity Man’s special abilities and change the playing field in a single bound.

Put your winnings and the future of the city in the hands of fate. After any standard win, you can bet all or half of your winnings. Flip a coin, choosing heads or tails and embrace your inner power for a win that is truly super