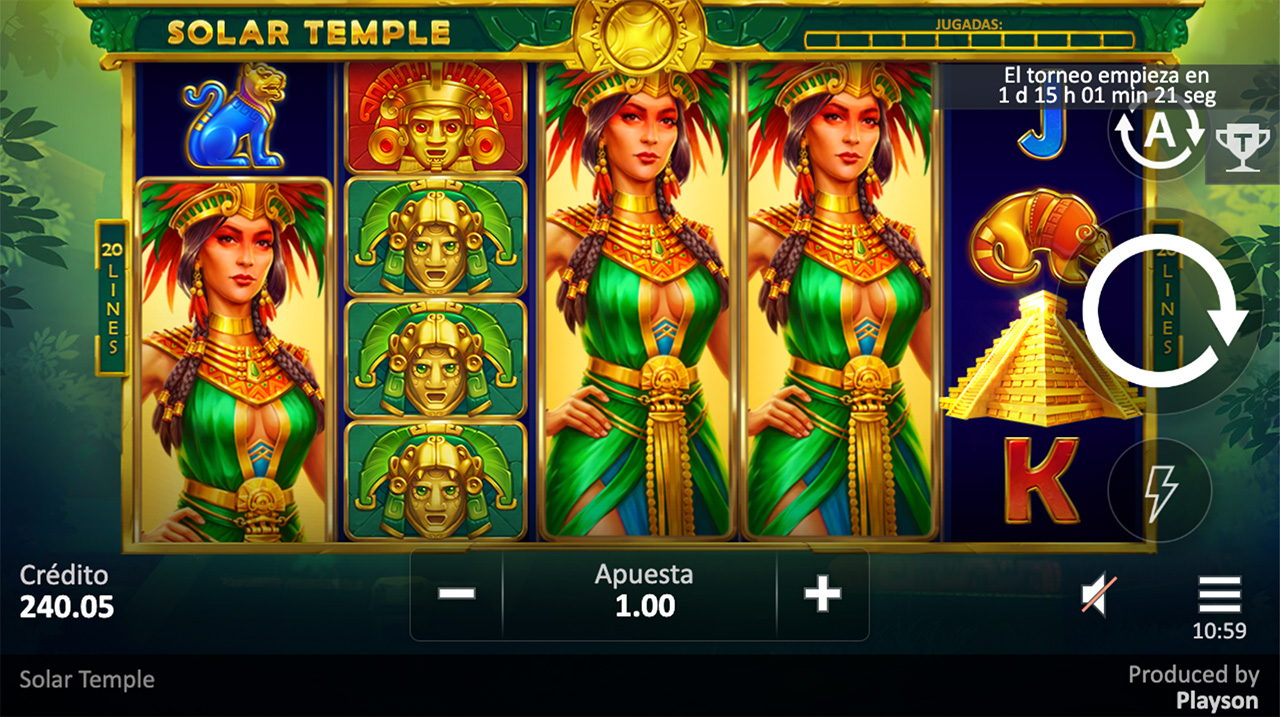 "Solar Temple" welcomes you in the mystical atmosphere of the ancient temple with the Charmed Aztec Queen. This slot has 5 reels, 4 rows, and 20 pay lines. There is a Flaming Frames feature with a progressive multiplier in the main game: Sun symbols ignite cells and every new Sun symbol multiples winning if lands in the ignited cell. Every 10th spin all flamed cells transform into Wild symbols. Free Spins mode, which could be triggered by landing of 3 Scatter symbols, will bring sticky Wild symbols.

“Solar Temple” is designed in the ancient Aztec theme. The background depicts a temple in the tropic jungle. The stacked symbol of Aztec Queen is the symbol with the highest payout. Other symbols are images of totems and animal talismans, colored in red or gold, which have the medium payouts. Low payout symbols are drawn as the 10-A Royals.

The Scatter Pyramid symbols depicted as a golden "teocalli" - the Aztec pyramid surmounted by a temple and highlighted by flaming animations to catch the attention. Sun symbols landed light up with the fire animation as well. In the Free Spins mode, the background becomes darker and more intense in the rays of the setting sun which added mysticism in the game process. The animation of adding a lot of Sun symbols will show you how many sticky Wild symbols there can be.

The Big Win animation - a golden rain of coins on the background of a huge blazing sun, which increases the effect of winning.

Substitutes all symbols except Scatter.

3 Scatter symbols during Main Game trigger 10 Free Spins. Appears on the reels 1, 3, and 5 only.

Activates Flaming Frames feature during Main Game. During Free Spins transforms cell to which landed into a Sticky Wild symbol.

Flaming Frames Feature is active during Main Game and consists of 10-spins cycles. Each Sun Symbol landed on the reel activates a Flaming Frame:

During the Main Game, Sun Symbol can increase current spin winnings with a progressive winnings multiplier: