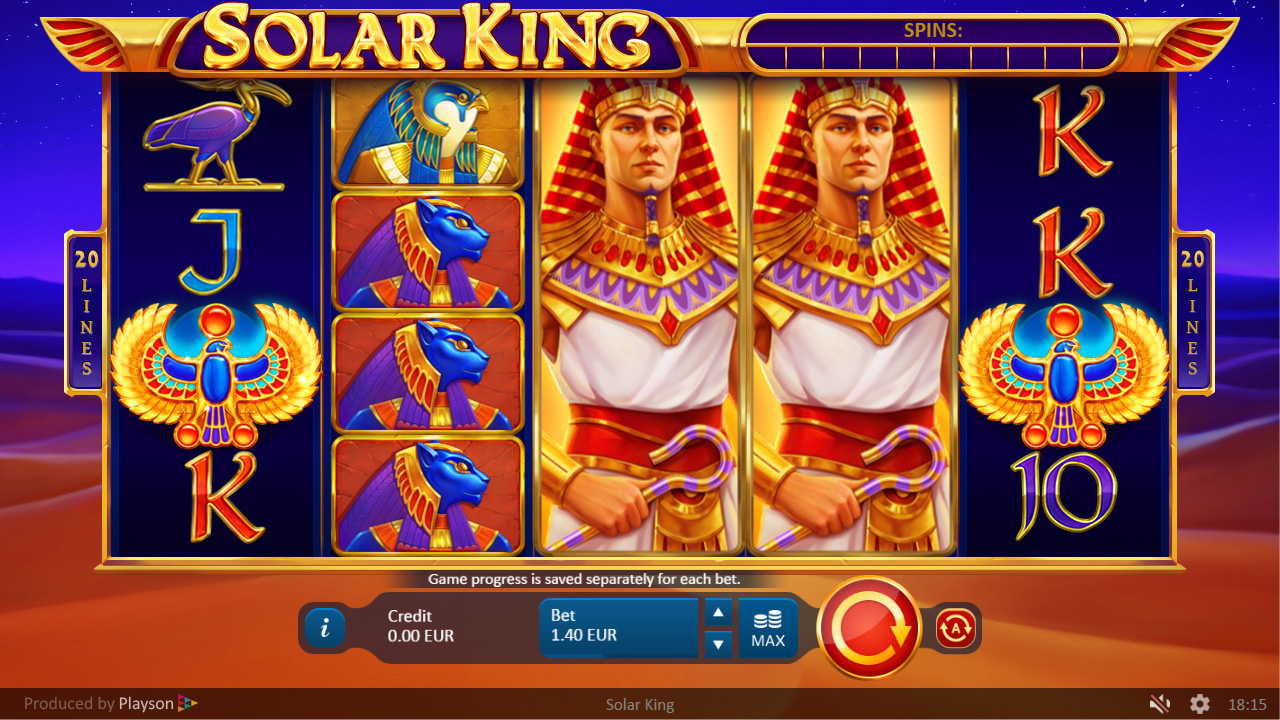 Take a look on the legendary tale from different angle. This time it is no one other than the son of Ra himself who gazes on the fearless adventurer above the night sky of Sahara desert. This is a brand new 4x5 video slot from Playson – “Solar King”. Long live the Solar dynasty!

Royal riches fall on the player via progressive accumulation of line Winning Multipliers and Wild symbols. Whenever the Sun symbol drops on the board during Main Game it activates the flaming frame that transforms into Wild at the end of a 10-spin cycle. In the Free Spins, Wild symbols become more reachable as they stick on the reels during the whole mode.

Solar King depicts ancient Egypt mysticism. The grand ruler of Egypt is depicted as a stack symbol, it is the highest payout symbol. Divine patrons of the pharaoh – Ra and Bastet are high payout symbols as well. Other special symbols are Sun symbol, Bird of Ra as Scatter symbol and Wild symbol. The latter is highlighted by flaming animation.

During Free Spins mode the background shifts from the peaceful night desert to the giant devouring sunrise. At its highest the Sun shines over Big Win animation with the shower of golden coins.

Substitutes all symbols except Scatter.

3 Scatter symbols during Main Game trigger 10 Free Spins. Appears on the reels 1, 3, and 5 only.

Flaming Frames Feature is active during Main Game and consists of 10-spins cycles. Each Sun Symbol landed on the reel activates a Flaming Frame:

Flaming Frame sticks on the reels till the end of the cycle.

On the 10th spin, all Flaming Frames transform into Wild symbols.

After the 10th spin, all progress drops and the feature resets. Flaming Frames location and the current spin number are saved separately for each bet level.

When Sun Symbol lands in the existing Flaming Frame, it gets a multiplier.

A multiplier increases by 1 every time the Sun Symbol lands in a frame second time.

A multiplier is applied to the line win.

Several cell multipliers on the line are summed up. After the 10th spin of the Main Game, the multiplier value resets to initial х1. Current multiplier is saved separately for each bet level.