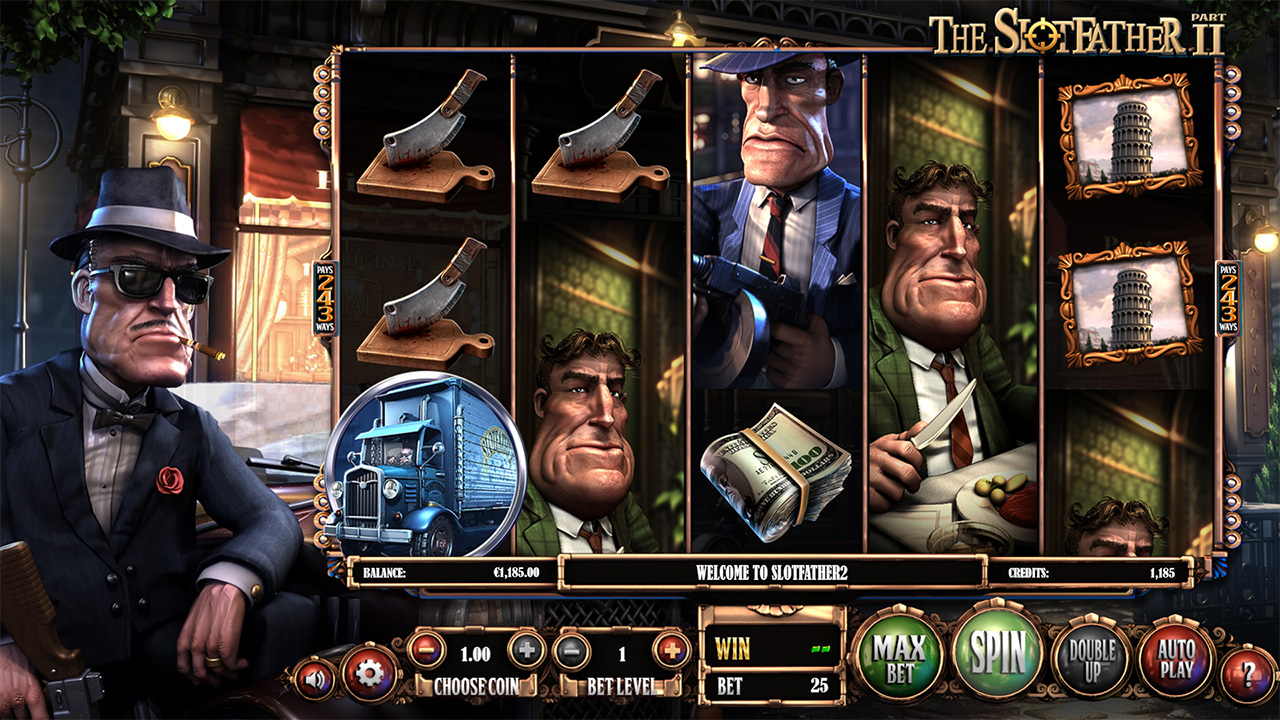 The SlotFather is back with all his henchmen in this exciting sequel to THE SLOTFATHER and styled on the most famous Scorcese Mafia films of all times.

This is a five-reel, 243-ways-to-win game that sees you running for the 'family' whilst getting the chance to win on some pretty generous bonus features, generous wilds, scatters, multiple free spins modes, re-spins, a gamble feature, and a bonus pick feature,

Experience life as a wily gangster as you run to do the SlotFather’s bidding. This is his world, and you are just a guest in it! Play sharp, play smart, and you may take home your very own cut of the Gang’s take! Featuring Tall symbols, THE SLOTFATHER PART II features impressive bonus rounds and thrilling elements to create the sinister mood surrounding the SlotFather.

The seedy gangster underworld comes to life in this game as the backdrop to the SlotFather’s nefarious activities. Shadow is prominently used to suggest the darkness in which “deals” are made and the stain of crime on the souls of the SlotFather’s henchmen. The SlotFather and his Gang are impeccably dressed in suits with clean retro lines, hearkening back to the 1930s.

The graphics on this game are pretty good. So good in fact that you will wonder whether you have just stepped into an actual Mafia bar in Brooklyn. Symbols include the Leaning Tower of Pisa, followed by a meat cleaver, a whiskey, a wad of cash, a card table and the highest-scoring, the Big Boss.

The Wild symbol is represented by a trunk of gold coins which substitutes for all symbols except for the Scatter. Appearing in just reels 2 and 4 in the base game, this lucky Wild pops up in reels 2, 3, 4 and 5 in the Free Spin feature.

Talking of Free Spins, these appear if three or more Scatter symbols come up on the reels. The Scatter, a dubious truck, also pays out a cash prize when two or more appear on the screen. Free Spins are awarded as follows: 3x Scatters = 8 Free Spins, 4x Scatters = 12 Free Spins and 5x Scatters = 25 Free Spins! After the feature, you'll always be awarded a Big Boss bonus single cash payout.

Look out for one of three Giant Gangster Bonus Symbols – either Fat Tony, Snake Eyes Sammy or Frankie (Knuckles). These elongated symbols can take over an entire row, and when two or more matching ones both appear in full view a re-spin is awarded, with the Gangsters kept in place for added wins. 3 or more matching gangsters and the Bonus Game will be triggered. During this game, you will enter a card game as one of the gangster characters. This is essentially a pick game where you could win pretty big.

This is an excellent slot game that truly has it all. With 243 ways to win, generous wilds, scatters, free spins, re-spins, a gamble feature, and a bonus pick feature, it's no wonder it's become such a popular game. All this and genuinely good graphics - there's everything to play for in  The Slotfather Part 2.

Get 3 or more SCATTER symbols anywhere on the reels to trigger FREE SPINS in addition to an instant prize.

Get 3 or more of the same GANGSTER symbol to trigger the bonus round!

Collect your cut from the businesses in town. Each gangster has a different approach to collecting protection money: Fat Tony is slow and steady, but he always collects. Frankie (Knuckles) can get carried away with his work, so it doesn’t always pay. But when it does, it pays big! * Snake Eyes Sammy is a measured risk-taker; not too cautious and not too wild.

Press the DOUBLE UP button after any standard win to gamble your winnings. Gamble half or all your winnings and gamble as many times as you wish. Note: DOUBLE UP is not available after Free Spins, Big Boss Bonus, Gangster Re-spins, and Gangster Feature