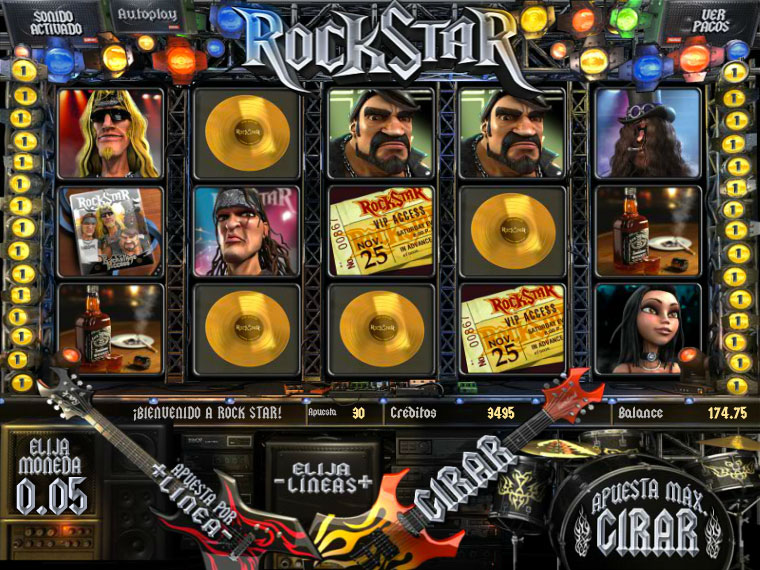 Rock Star is a five-reel slot with three rows and up to thirty pay lines and begins with one of the best 3D video scenes we’ve seen in while on any 3D slot. It shows the band backstage, glimpse into the life of these long-haired rockers preparing from their gig with thousands of fans waiting for them to come on stage. Once they do the lead singer shouts’ are you ready for Rock Star?’, then the slot loads.

This game is super graphic intensive and has some killer audio so turn off the light’s and turn up the volume as you play your way through this rocking slot. The entire slot is rock and roll themed with flashing lights surrounding the logo in the header and styled buttons at the bottom. These include dual guitars, an amp styled coin selector and a drum kit spin button. The reels themselves are full of rock stars and the paraphernalia associated with them.

Prove you’re a rock star by playing epic solos, earning gold and platinum records, and most of all – by rocking out! Join the world's greatest rock band, "Rock Star" on their whirlwind world tour. Be electrified by the amazing winnings from the Epic Solo bonus and the amazing "Rock Concert Bonus Round" where you become a part of the show!

Rock Star is a great looking slot with lots of fantastic animations and a thumping soundtrack to keep things bouncing along. This is a game for rock fans and in fact anyone else as well.

Receive 3 or more guitar symbols in a winning combination on any active pay line to unleash the Epic Solo! Rock your way into instant bonus coins!

Earn either gold or platinum record wild symbols in a winning combination to multiply your wins by 2x, 5x or even 10x!

Are you ready to rock? Receive 3 or more ticket symbols in a winning combination on any active pay line to trigger the bonus round! Click the colored pegs as they slide along the guitar's fretboard. Time your clicks right, and you'll get bonus multipliers for each peg clicked!