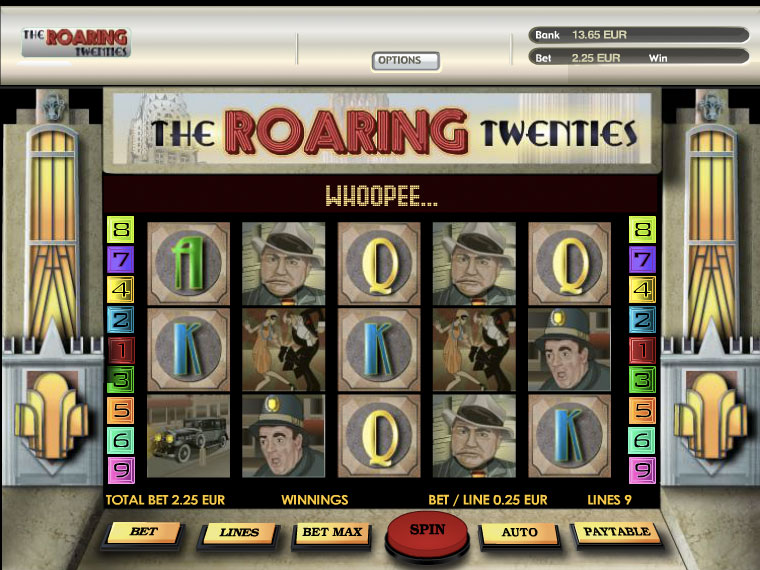 The golden 20s, a time like no other and unforgettable

The Gangsters, the Charleston, and The Dry Law are the great icons of the golden twenties. Get them to win some great prizes. Step right into the wonderful 1920s and be part of that glamorous era. These Gangsters are the big stars on the reels, being chased by the cops.

In this 9-line, 5-reel slot machine you'll find all the symbols that were inspired by the era.

The 1920's in the United States was certainly an interesting time. It was right after the First World War and the economy of the whole world was collapsing.

The Dry Law became latent at that time and with the prohibition of substances such as alcohol an extensive system of illegal trade was created. These Gangsters were trading with tobacco and alcohol in the city's underworld, making large sums of money. However, the police were not going to let them smuggle it out from under their noses with impunity.

Besides the theme, this is a 5 reel 9 payline slot game. The lines are all adjustable and there is a range of fixed options. All the symbols on the reels are also themed, with each of the main symbols related to the era. As for the bonus features in this slot game The Roaring Twenties there is a wild symbol, which is always very helpful, and a themed bonus selection game with increasing multipliers to win.

The sound effects used here at The Roaring Twenties slot machine also play a considerable role in portraying the atmosphere.

Enjoy this classic slot machine, with no big thrills as we are talking about a somewhat old-fashioned game.

The newspaper is the wild card in this game and substitutes any other symbols.

Get barrel symbols to trigger the bonus round.