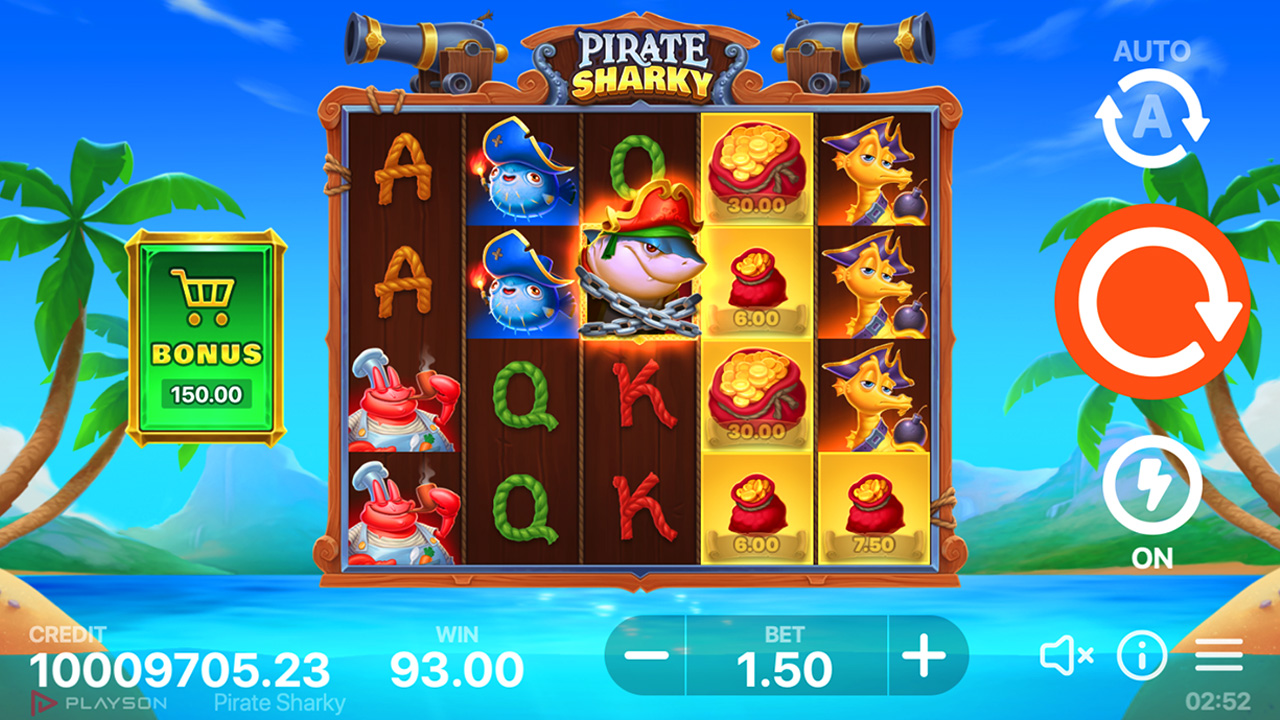 Join Captain Sharky on his pirate journey – looting and plundering!

The voyage begins on the 4x5 grid stylised as an old, creaky ship, fitted with mighty weaponry on top! The reels of the slot represent the deck of the ship, line up pirate crew-members or knotted royal symbols on one of 12 lines to get your win. Of course, there is also the main villain himself – Pirate Sharky. Chained up in the main game Pirate Sharky cannot get to all those money bags, with promising prizes on them. You will need to hit 3 or more Pirate Sharky symbols to get to the Free Spins and loot those enticing rewards.

Somewhere in the tropical seas of the Caribbean, a very strange crew of pirates navigates their run-down ship to undiscovered treasures. In Playson’s new game “Pirate Sharky” a squad of peculiar fish got their hands on an old pirate vessel and are now on a quest to find some fame, adventures and of course gold.

Only the best were meant to get on the team with the Pirate Sharky himself, but somehow he ended with these fellows… Pirate Sharky’s team include a trustworthy crab-cook, phlegmatic cannoneer seahorse, unshakable skipper squid and a rather odd pufferfish, that is in charge of explosives on the ship. Sharky’s squad members make up 4 high-paying symbols of the game, while the low-paying symbols are theme-styled royals.

Money bag symbols are activated during the Free Spins and whenever Pirate Sharky and money bags are on the screen, he gets to loot all their desirable values.

Moreover, whenever Pirate Sharky loots enough bags, he pulls out his trusty treasure map and looks for more treasures on the reels, while also multiplying all their winnings!

3 or more Scatter symbols trigger Free Spins. Appears on all reels in Main Game only.

Substitutes for all symbols. Collects all values from the Money Bag symbol in Free Spins. Appears on all reels in Free Spins only.

Any Wild Symbol landing on the reels during Free Spins collects all the monetary values from the Money Bag symbol on the reels. Collected values are added to the total win of Free Spins.