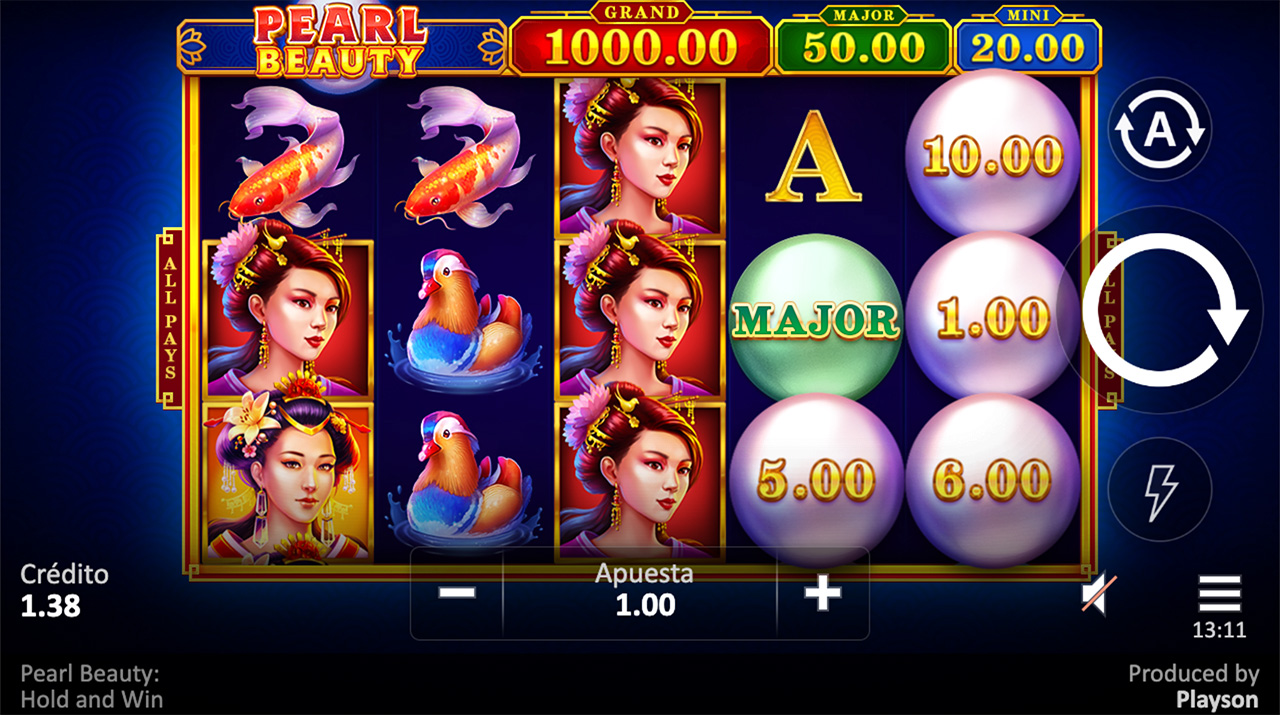 “Pearl Beauty: Hold and Win” is an All Pays, 3 rows, 5 reel video slot with 243 ways to win, and includes one more popular feature – Hold and Win mechanic in Bonus Game.

If you collect 6 pearls during the main game, you can trigger the Bonus Game and find a special collecting symbol that can appear there – the Golden Pearl symbol. Bonus Game gives you one more special opportunity to increase overall winning. During the bonus round, there is an additional chance to win three in-game Jackpots, Mini, Major, and Grand, adding even more suspense to that Bonus Game. The random appearance of Major Bonus symbol during the Bonus Game triggers the Major Jackpot, whereas the appearance of Mini Bonus triggers the Moni Jackpot. The Grand Jackpot is won when all 15 cells are filled in with Bonus symbols.

“Pearl Beauty: Hold and Win” is an oriental-themed video slot designed in Asian style with 2 mysterious female characters as the symbols which provide big prizes, the mandarin duck, koi fish and lotus flower as middle payout symbols and Royal symbols with intricate design. The Bonus symbols are represented as bouncy white pearls, special collecting symbols as Golden Pearl, the symbol of Mini Jackpot as the blue one, and Major Jackpot as green.

The calm mystic soundtrack is accompanied by colorful imagery and deep dark blue background rises thoughts of far-distant seas. Big Win animation, however, will catch you off guard with sparkling particles.

Represented by the Ying-Yang symbol substitutes all symbols except Bonus. Appears on reels 2, 3, and 4 only.

During Bonus Game, there is a chance of the appearance of Golden Pearl symbols. Each time the Golden Pearl appears it gathers values of all landed Bonus symbols, the sum of which becomes the value of the Golden Pearl. This can happen only once, and it does not gather additional values from any ordinary pearls that appear after this event.