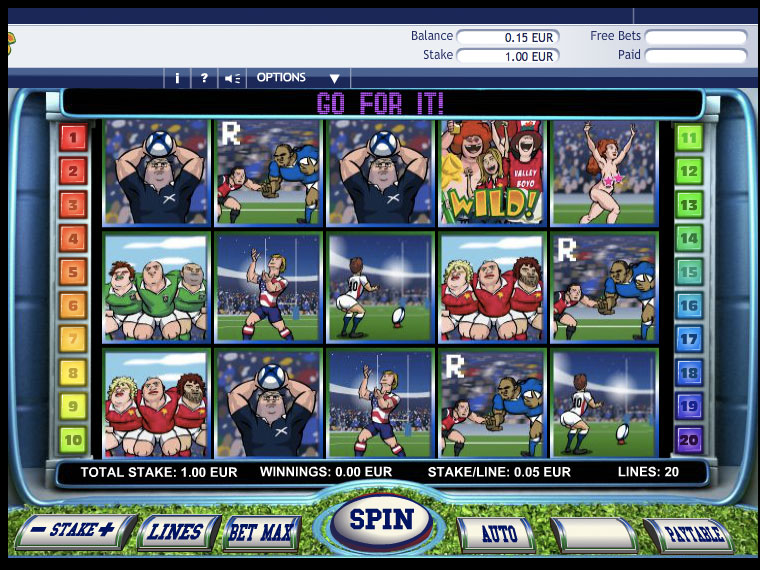 Assemble the balls to win the most.

This slot game will give you the chance to win some attractive winnings. If you’re a fan of rugby, or even if you aren’t, this one’s certainly worthy of your attention. The ten symbols you will find are all rugby-related and each depicts a rugby scene in comical cartoon form. One of the symbols is of a demented, dreadlocked All Black player, his mouth agape, his eyes like golf balls, three Welsh players in a huddle, a player in a white shirt lining up a penalty kick, a burly Scottish player preparing to throw the ball, a huddle of Irish players – and so on. The symbols are good fun; the effect is very much akin to a rugby-themed comic book.

The coin denomination starts at 0.5 and tops out at 50. You can play on any number of lines between one and 20. The aim of the game is simple: form matching combinations of three, four or five symbols on adjacent reels, starting from the leftmost reel. The only exception is the scatter, which pays wherever it appears on the reels.

As well as regular symbols, Odd Shaped Balls feature both a wild and a scatter to enhance gameplay, and even a few multipliers to watch out for. The scatter is a voluptuous red-headed streaker running across the pitch as the crowd roars in the background. Land three or more of this busty lady and you’ll win either 15, 20 or 25 free spins. You’ll also win a multiplier on all subsequent wins, equal to 2x for three, 3x for four and 10x stake for five. Imagine landing 25 free spins plus a bumper 10x multiplier on all wins!

The wild card shows a bunch of riotous rugby fans and can substitute for all other icons except the scatter. It also doubles wins it helps to create.