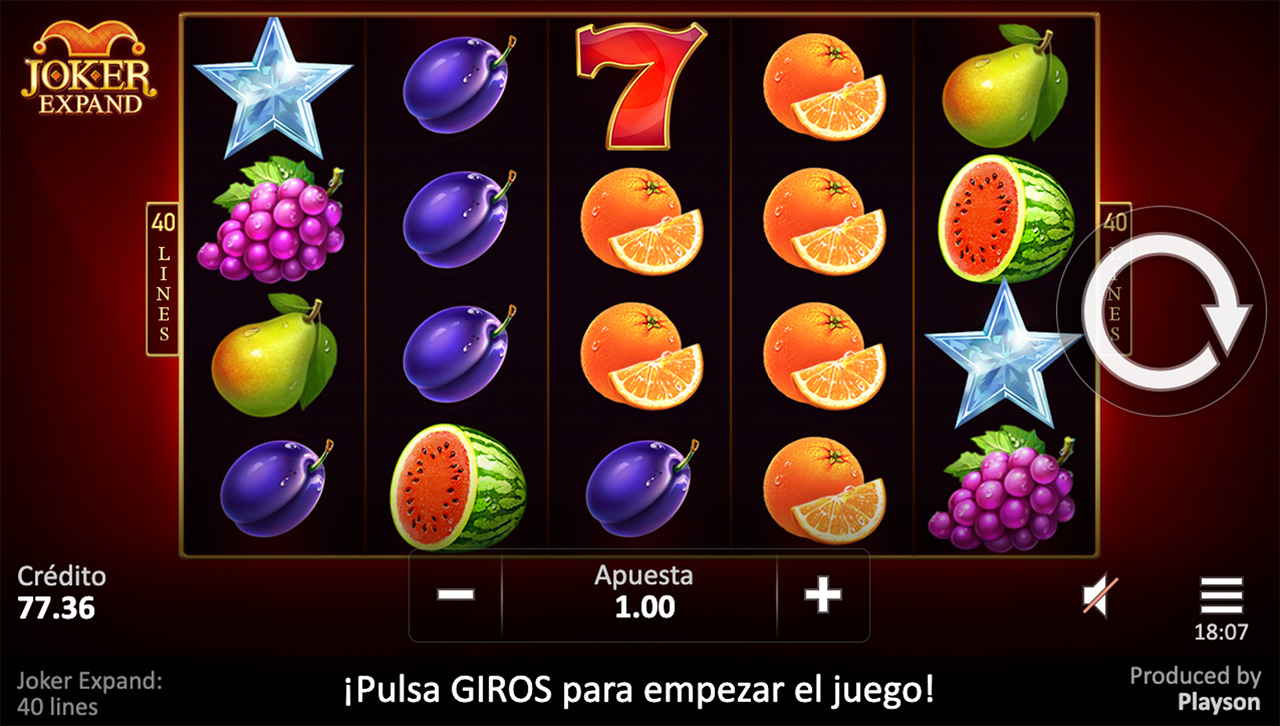 “Joker Expand: 40 lines” is a video slot with 4 rows and 5 reels and a sequel to royal harlequin timeless fruit slots games.

The key accent is given to the highest paying symbols: Stars and Sevens. Sevens are bright red, and stars, which are scatters have gold and diamond texture.

The wild symbol is drawn as a Joker, then the 2 types of Scatters: Gold Scatter, and Diamond Scatter. Scatter wins pay regardless of pay lines. Red sevens are the most valuable symbol and to bring the highest payout. With just two on a payline awarding a win and x100 the original stake for landing 5 across a payline. The rest of the symbols include watermelons, grapes, pear, plums, oranges, lemons and cherries which will bring some fruitful combinations for sure.

The Wild symbol is represented by the golden royal Harlequin. First, a player sees only the head of the figure. But when winning occurs, the full figure of the Joker occupies the whole reel. This symbol can appear on reels 2, 3 and 4. Every time a Wild lands on these reels, it will expand to occupy the entire reel and boost the chances of hitting a winning combination. It is also possible to land 3 fully expanded reels for an even bigger win.

There are two Scatter symbols on Joker Expand: 40 Lines, both of which appear as stars. The diamond Scatter can land on reels 1, 3 and 5 and will award the player x20 the initial bet when three appear during the same spin.

The second Scatter is the gold star and it can land on any of the game reels. When 3, 4, or 5 appear on the same spin, it will reward the player with x3, x20 or x100 the initial stake.

Wild symbol substitutes all symbols except Scatters. Expands on the whole reel, if it can compose a winning combination. Appears on the reels 2, 3 and 4.

Scatter wins are paid independently of bet lines. When 3, 4, or 5 appear on the same spin, it will reward the player with multipliers from x3, x20 or x100 the initial stake.