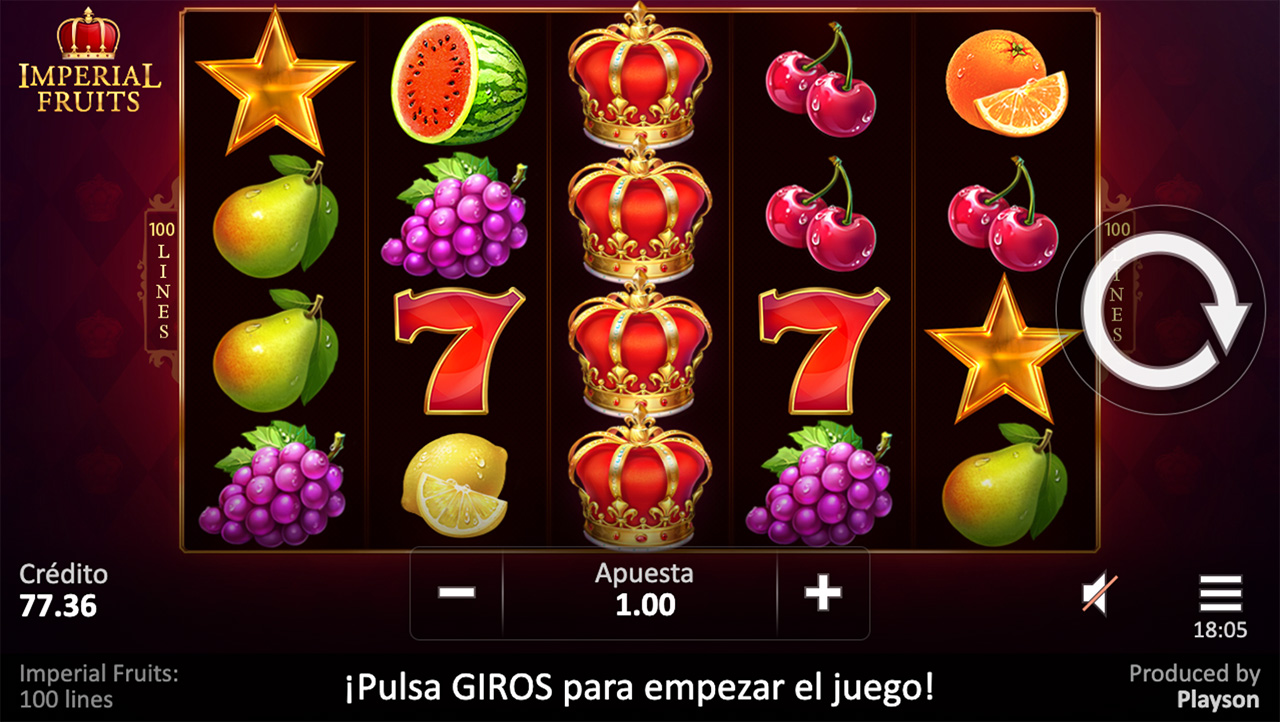 The royal-themed Imperial Fruits is a classic slot that offers you what you want most: big thrills, big wins and plenty of simplicity. And now the sequel is offering more: 100 ways to win!

Imperial Fruits: 100 lines slot is a 5 reel x 4-row game field with fruits and Red Sevens as symbols with the highest payout. Two kinds of Scatter symbol: Gold and Diamond, which wins pay regardless of pay lines. All of them are ruled by a Royal Crown which acts as Wild symbol and expands on the whole reel to increase the chance of composing a winning combination. The video slot “Imperial Fruits: 100 lines” is designed in deep red and gold royal shades. The symbols are drawn as photorealistic fresh fruits.

The wild royal crown symbol, with gold and red velvet, is an important element of the game since it can appear stacked across an entire reel, allowing for more wins. On the other hand, the two scatters, the Diamond scatter and the Gold Scatter, awarding prizes separately to the pay lines.

When playing on the biggest wager of 100, the biggest sum is 10,000 and that is for the gold star scatter landing anywhere on the screen in 5 instances. When it lands in four positions the prize is 2000.00. The diamond scatter is just as valuable, albeit in a slightly different manner. The Diamond star doesn't pay winning outcomes above three stars on reels one, three and five. However, the prize for three of the same is 2000. You need four gold stars for the same amount.

The lucky red seven pays 5000.00 when five lands on a line and this symbol can get a substitute from the Wild. The four-symbol win pays 750.00, which is great. The watermelon and the grape symbols pay 1000 when five of the same fall on the grid.

Wild symbol substitutes all symbols except Scatters. Expands on the whole reel, if it can compose a winning combination. Appears on the reels 2, 3 and 4.

Scatter wins are paid independently of bet lines and appear on all reels.

Hit 3 scatters and you will win x20 your bet.