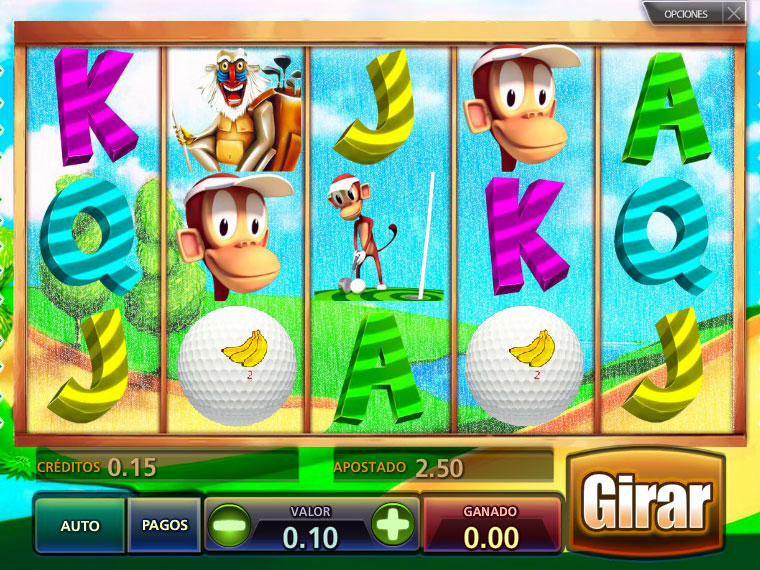 These golfer monkeys will make you laugh and win in this funny game!

Monkey around with these amusing primates for fun and great winnings.

In a crazy combination, the reels are set on a gold course with all the paraphernalia the game involved, but with monkeys rather than people!  Will you end up scoring a hole in one or will you just be monkeying around?

Golf’N Monkeys is a humorous slot game of 5 reels and 25 pay lines, you will find Lovable Apes cartoon-like graphics including a view of a golf course in the background, colors are bright and vivid, creating a screen which is inviting and cheerful. The sky is an azure blue and the golfing greens are lush and smooth, ready for some of the world’s best players to tee off on. Or, of course, monkeys.

On the reels you’ll find a smattering of monkeys in different positions, some wearing a hat (of course) along with golf balls adorned with bananas and letters representing playing cards. It’s a curious combination but it creates a smooth and very playable game which features a catchy tune in the background.

The monkey face with the cap can make you win up to 2000 credits if you get five of this symbol at the same time. There is also wild and scatter symbols too which can help increase your winnings as well as handing out free spins. If you spin five of the wild symbol you could scoop a big prize of 5,000 up for grabs.

Golf's Monkeys is a delightful game which is likely to be very popular with anyone who likes playing anything that’s a bit quirky and who can resist a monkey playing golf?!

The hole is the wild symbol which replaces all basic symbols on the reels.

The golf ball is the Scatter and hitting at least three of them anywhere on the reels will provide some Free Spins. During free spins, you may win additional free ones whenever 3 scatters appear.