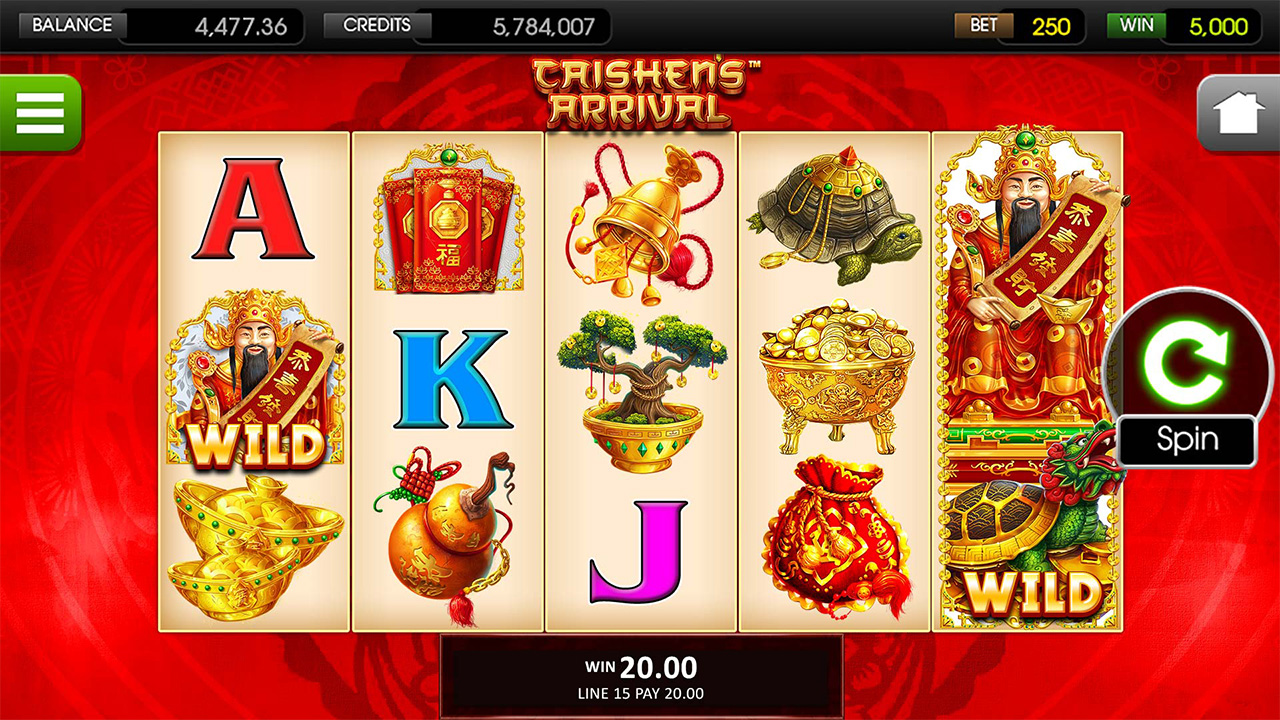 CAISHEN’S ARRIVAL is a 5-reel, 25 pay line slot game with a full reel with stacked wilds, re-spins, a free spins bonus round and instant-win scatter features.

Discover boundless wealth in the slots game Caishen´s Arrival! With the amazing blessings of Caishen, prepare to delve into a world of riches!

Caishen´s Arrival features fast-paced slots gameplay with amazing possibilities. Featuring a multiplier of over x35000, the wins can reach the skies.

The theme with Chinese customs and luck/wealth related symbols are present in all major positions on the reels. Caishen himself, the god of wealth, is the one acting as the substitute, while the bonus symbol uses the image of a red money envelope. The game will also give you the gold ingot, money tree, a pot filled with gold coins, a money bag, a noisemaker, a gold bell, a turtle and cards from 10 to Ace.

There are three tiers of value, it starts with the lucky turtle symbol, and he’ll give you 400x for five of a kind on a pay line, which is the same as for five scatters. Those two wins tie for the best individual pays in the game, but with the stacked wilds, it’s possible to get multiple iterations of the turtle combo at the same time.

Seek the many blessing of Caishen. Caishen´s blessings are universal and allow him to work as a WILD with all other symbols for BIG wins. Caishen blesses scatter wins as well, awarding riches even if the Coin Purse is not on the reels.

Wild substitutes for all symbols except the Free Spins symbol. The Wild symbols appear on reels 2, 3, and 4.

If 3 wild symbols, portraits of Caishen, appear stacked on a single reel they will fuse together into one large symbol, and remain locked in place for a free re-spin.

Stacked Wilds can appear during the free re-spin and the process will trigger again.

If free spins are triggered at the same time as, or during a re-spin, the re-spin will play through first and only when it is complete and all wins have been awarded the free spins will be played.

Note: if 2 or more Wild reels appear on the reels in a single spin, only one re-spin will be triggered.

Good fortune awaits those who find a Red Ticket symbol on the first and last reels and trigger the free spins bonus round. You will be awarded 10 free spins.

The Red Ticket only appears on reels 1 and 5. If the Red Ticket appears on both reels in the same spin, 10 Free spins will be awarded. Free Spin retrigger is available. During Free spins, all wins are multiplied x3.

Cash is on the Sacred Coin Purse. If 3 or more appear anywhere on the reels, you will be treated to a cash prize and legendary rewards.

Caishen counts toward the riches of the Coin Purse, and Caishen will bestow the same rewards even, if the Purse can not be seen. There are solid scatter pays as follows:

The Coin Purse Scatter and Wild symbols award Scatter wins. Only 1 wild per reel substitutes for a Scatter. If there are multiple wilds on a reel then a scatter win will be awarded involving each one. Wilds substitute for scatters, even if there are no scatter symbols present.

Put your Wealth in the hands of Caishen, and hope for good fortune. After any standard win you can bet all or half of your winnings. Flip a coin, choosing heads or tails and, if the will of Caishen is with you, your riches will multiply.