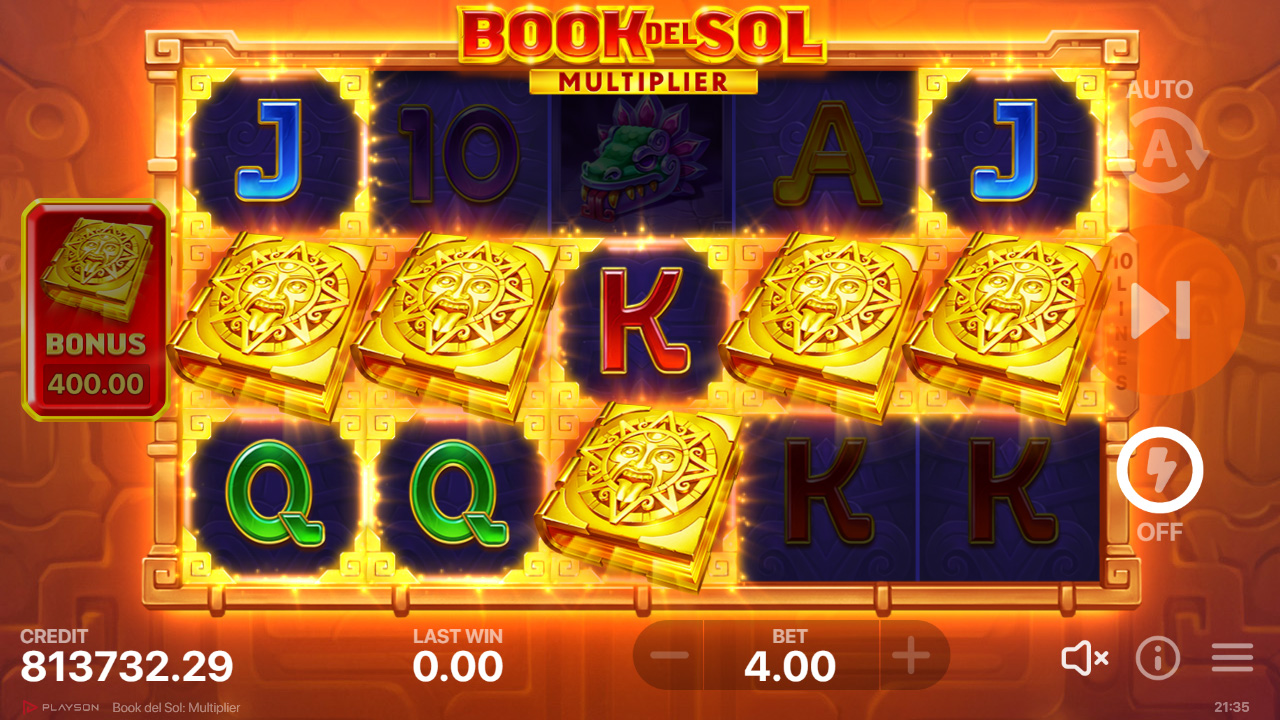 Look for the Sun to maximise your winnings!

An ancient Aztec temple of the Sun deity watches over piles of gold within its walls. Few adventurers could make it here, and one of them is the fortune Soldier in the silver armour. The treasury is guarded by the Jaguar, who never lets the precious masks of Dragon and King out of sight. The aforementioned are high-paying symbols, while the low-paying symbols are theme-styled royals.

The god of the sun is generous and sends a key to even greater wealth – the golden book with sun emblem, which is the Scattered-Wild symbol. A combination of book symbols triggers Free spins and the Special Expanding symbol for the mode is revealed on the sacred pages. In the background of Free spins, the eyes of the Sun deity flicker, and the flaming fire from torches colours everything in shades of crimson. The Special Expanding symbol turns gold and increases the chances of winnings. Another deity’s gift is the Progressive multiplier, which is activated by Sun symbols, embodied in coins.

The sounds of past glory are evident within the temple walls, as well as the jungle ambiance.

The treasure hunt continues in a new chapter of the iconic Book series, now on the territory of an ancient Aztec temple featured in “Book del Sol: Multiplier”.

The adventure starts on the 5x3 grid and gratifies the bold ones on the 10 winning pay lines. This game is led by the Scattered-Wild symbol in form of a golden book with the sun emblem. The arrival of 3 or more books triggers the Free spins mode with a Special Expanding symbol that fills up the whole reel. In addition to that, the Free spins mode features an upgradable multiplier for all Special Expanding symbol’s winning combinations multiplier. An exclusive Sun symbol upgrades the value of the multiplier from x1 to x2, x3 and x5, which increases greatly the chance of Big wins!