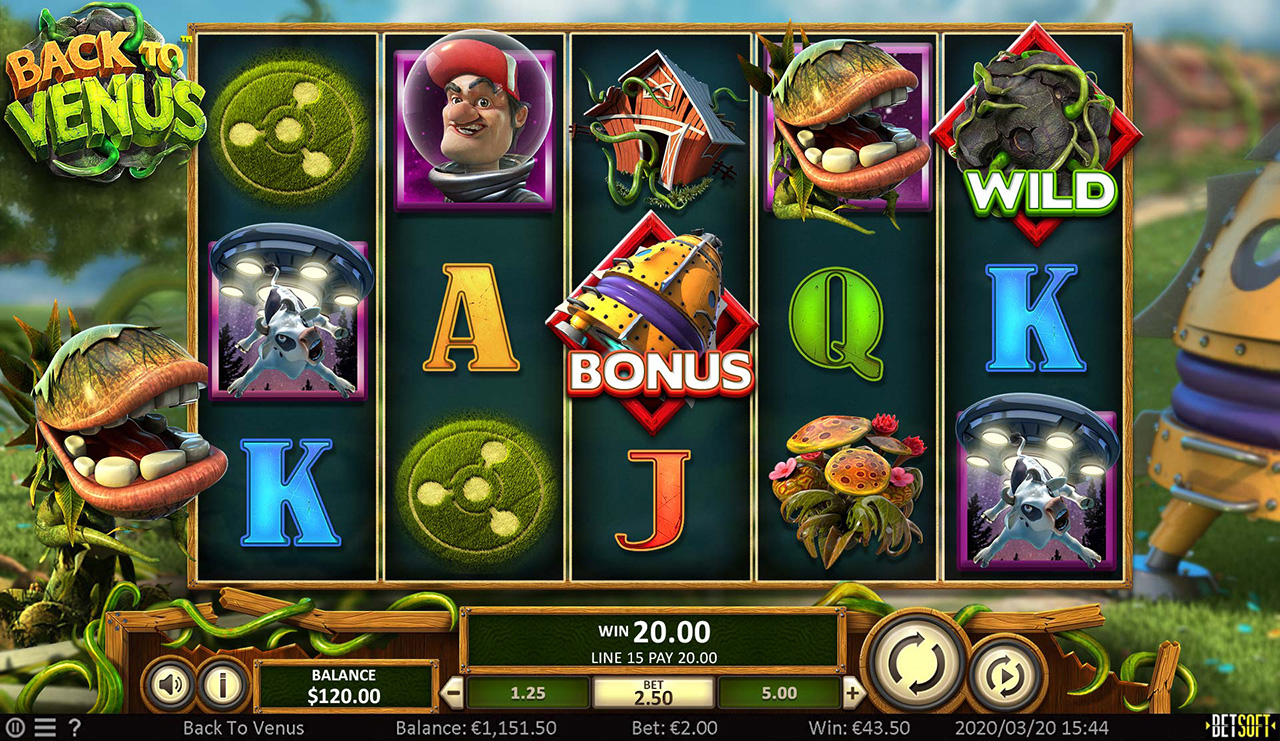 The Plant has returned and is prepared to take you BACK TO VENUS in this charming 5 reel, and 20 ways to land a winning combo, video slot!

The main scene of events takes place at a farm. The background is very colorful with a beautiful green field and pretty flowers all over it. There are also meat-eater plants overgrowing everything including the barn. The sky is a nice blue color and yellow robots are running around as the farmer escapes to Venus. You are surely going to love joining our farmer on his journey.

The symbols are the most interesting part and include the regular royals as the lower-paying symbols. Then there are alien plants and mushrooms, barns, cows, UFO signs, and of course farmer Joe. The game also offers a wild symbol that appears in the form of an asteroid and a scatter symbol that is represented by a space rocket.

Presenting two revolutionary Second Chance features, this delightful sequel will reach out and grasp you in its appealing alien plant theme.

The Prickly Sticky and Re-spin feature will choose a symbol at random and continue re-spinning until there is a win with that symbol! The Plant can also exercise its alien power in the Flowering Wild Burst feature, awarding a Free Re-spin and an increased chance for Asteroid WILDS to hit the reels!

Frequent storms of Sticky Asteroid WILDS are possible with the Plant’s presence. A second screen Free Spins mode that takes you to Venus, with a chance for multiplier WILDS, awaits you in the Rocketship. Climb in and take off for flowering fun in space!

The Prickly Sticky and Respin

If a spin has no wins, there is a chance that a random symbol can be chosen to become sticky on the reels and award a re-spin. Re-spins stop when there is a win with the selected Sticky symbol. Free Spins awarded before the Prickly Sticky & Re-spin feature will occur directly after the feature has finished.

The natural power of the Plant can go Wild. With every non-winning spin, there is a random chance that the reels will light up with the wild flowering power of the Plant. This increases the chance that ASTEROID WILDS will appear on the reels. Free Spins awarded before the Flowering Wild Boost feature will occur directly after the feature has finished.