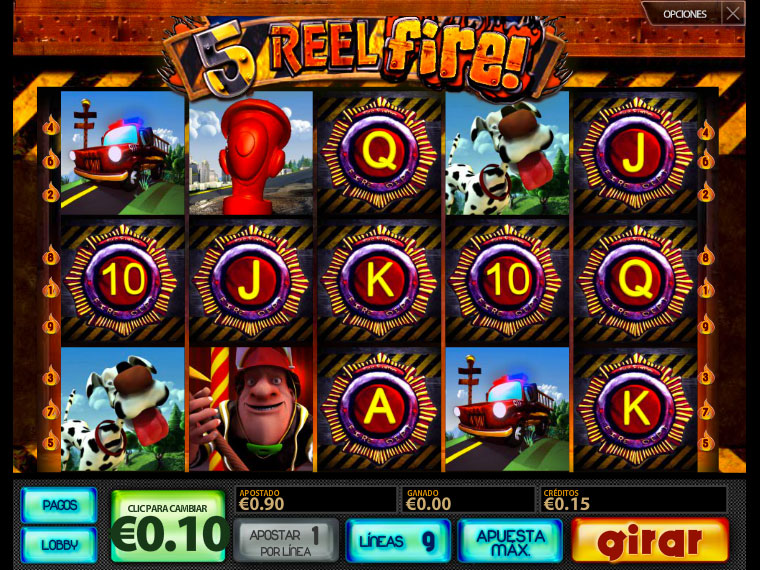 Hearing those words in real life would have anyone in their right mind running away from the scene, whilst they called the authorities, but in this title it has you running towards the flames. That’s because they’re smoking hot… with money!

All that cash we are so desperate to get hold of is burning up in mere seconds, leaving us frantically throwing about buckets of water while we wait for the fire brigade.

The hottest of all the symbols? That’s the wild – look at it, it’s a picture of flames. You can’t get much hotter than that. Though, yes you can, for five wilds has a sweat-inducing you can win up to 15,000 credits! Not as fired up, but more than ready to take on the flames is the scatter symbol in all its protective glory.

The fire brigade helmet casts aside petty money and instead gives you a blast of its free spins hose. In a sort of trade-off with the wild, the number of free spins you can win is limited to 15, however, you can activate more during the free games.

Not each calls out is for a massive house fire, sometimes it is a smaller life or death situation, such as a cat being stuck up a tree. Many felines are renowned for making their way up but never successfully navigating their way down, and so a man or woman in uniform has to assist. There’s usually an old dear on the corner of the street, clutching her chest, filled with concern. The cat symbol in 5-reel Fire may have you winning between 15 and 200 credits; unlike the cat, the dog upon the reels is a lot more relaxed about the whole thing, enjoying the time it has with its new friend. It can also be found in a group of three, four or five, and it can be worth up to 500 coins.

Between the dog and the next symbol, which is a fireman, there is a dramatic jump in credits, to a huge 2,500 of them!

Wild can substitute any symbol except Scatter.