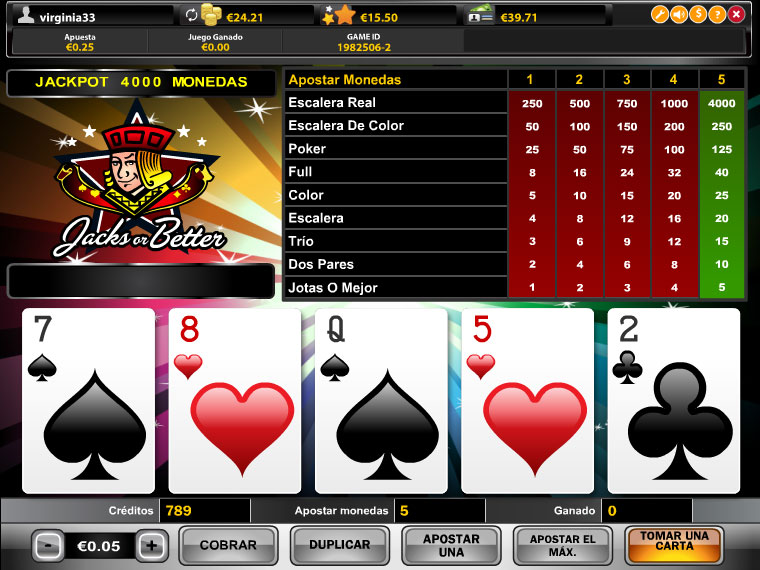 The objective of Jacks or Better is to obtain a five-card poker hand that contains at least a pair of Jacks... or better!

With so many variations of poker available to players, one of the most interesting versions of the game is known as Jacks or Better. (This is sometimes referred to by Draw Poker.)

It is one of the easiest variants of video-style poker for players to partake in because a player only needs to have some cards in their hand with Jacks or better in it to get a payout. It was the original video poker variant to hit the online gambling scene, and that is why it is so similar to the very first Draw Poker casino game.

When you first start out in this game, the hand begins when the player makes their first bet. They are subsequently dealt 5 cards, which the player may hold onto or discard in the quest for a winning hand. It is all up to him or her.

Now we are going to talk about the hands. New players especially should familiarize themselves with these hands before diving into the game, as not doing so will just leave them confused.

Here are the possible poker hands that will result in a win.

How to Play Jacks or Better

If you have ever actually played this game, you know that this game depends on choices and strategy. You are dealt five cards and then you choose the ones you wish to keep for the upcoming round. You click where it says “deal” and that is how you get your final combo.

So how is one to know what to hold? You can review the strategies below, and also take note of these basic methods, too:

Jackpot! With a maximum bet and Royal Flush, you win the Jackpot!

So long as you know the right strategy, Jacks or Better can be a great game for fun that lasts hours. Play for fun and then get serious as you get better and better through practice.