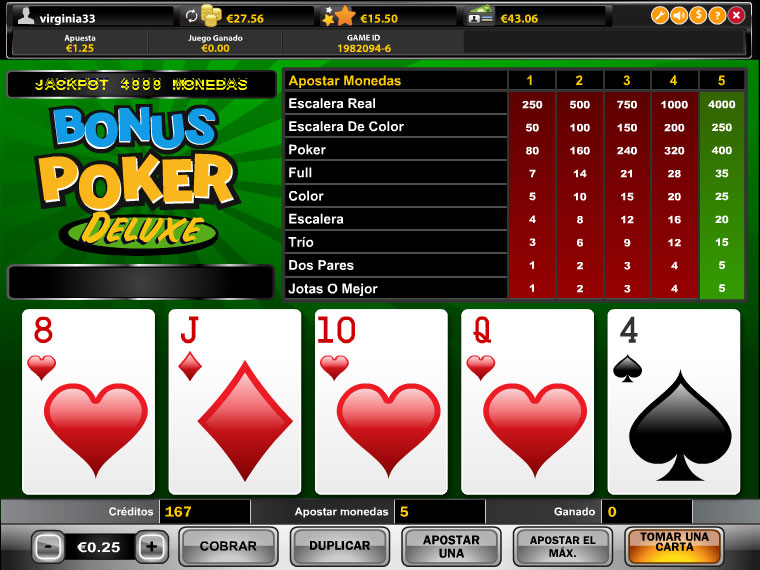 Bonus Poker Deluxe is a great way to feel the excitement of poker with a fun twist, four of a kind.

Bonus Poker Deluxe may seem like it requires some serious brain power to understand and fully appreciate. The truth of the matter is, it is actually much simpler than Bonus Poker!

It is basically more similar to Jacks or Better than it is Bonus Poker. This is due to the fact that the game gives you one single big pay out for four of the same cards, without making a discernment between the ranks of the cards which created that poker hand.

Here we will give you some information about how you can actually play this game, the differences among other games, and the best ways to get those high paybacks.

The best thing to do is treat Bonus Poker Deluxe as a variant of Jacks or Better. This is a general video poker game that is enjoyed by newbies and veterans alike. If you have already played or even read our other article about Jacks or Better, you are probably well versed in the basics. If not, check this out:

The strategy is just like that of every other video poker online game. You will want to make the decision that gets you the highest return on each and every one of your possible hands. This is usually indicated by a list of possible hands, ranked from the best to the least desirable. You will start at the top and move downward, hand to hand, until you find the one that best matches what is in your possession. These are the cards you will hold onto.

You may wish to print this out or save it, so you have it at your next game1

As we discussed earlier, Bonus Poker Deluxe is a variation of the game Jacks or Better. The difference between this game, however, and the game Bonus Poker, is that all 4 of the same hands pay at 80 to one. So, it is a hugely popular game for poker lovers and newcomers.

There are also many more big payouts because 4 of the same hands appear a hundred times more often than royal flush. This means a gamer can enjoy many opportunities to win big.

The strategy to win is pretty easy. It is not necessary to discern between four aces and four 6s, 7s, 8s, or 9s, or to tell the difference of four clubs and four 3s. All 4 of the same style hands are of equal importance just as you find in Jacks or Better.

So, the strategy is just a bit more complicated than Jacks or Better. Therefore, it is a great choice for newbies and people who just like to play for those larger payouts on four of the same hand and are willing to give up a casino advantage in order to nab those payouts.

So, be wary of the big casino advantage when you play this. If you can get past that, and you like to see more big pays more often and you are not too concerned about what price will be, this may just be the distraction you are looking for.

Bonus Poker Deluxe is a great way to feel the excitement of poker with a fun twist. The best thing to do is practice first and put the strategy to the test, then consider playing for real money when you feel ready. Play responsibly and have fun!